Rotting Christ
Carach Angren
Uada
Gaerea
Rotting Christ is a Greek black metal band formed in 1987. They are noted for being one of the first black metal bands within this region, as well as a premier act within the European underground metal scene. They are also responsible for creating the signature Greek black metal sound prevalent in the early 1990s. Early in their career, they were responsible for creating what is known as the "classic" Greek black metal sound which can be heard in other bands such as Varathron and Thou Art Lord. Despite the name, the band's traditional lyrical themes involving evil and occultism has evolved into a more "mystic" path, and they have modified their musical direction on each album, utilizing elements such as clean melodic baritone vocals, doom, gothic metal and industrial music traits, and male/female Benedictine chants. Recent albums, beginning with Khronos, have shown the band taking a more modern, faster and more aggressive approach to their blackened-gothic style.

Carach Angren is a symphonic metal band from the Netherlands, formed by two members of the now-defunct bands Inger Indolia and Vaultage. Their style is characterized by prominent usage of orchestral arrangements, harsh vocals, and guitar riffs. Their studio albums are concept albums with lyrics based on ghost stories and folklore, such as the Flying Dutchman. The band sets itself apart from other symphonic metal artists with the usage of multiple languages such as English, French, German, and Dutch.

Derived from the Latin word for "haunted," Uada is a household name within most black metal circles. Their impact in the sub-genre is comparable to what bands like Memphis May Fire and the Devil Wears Prada have had on metalcore. Setting themselves apart in every record with their pace, vocals, and energy, the Pacific Northwest act lives up to their name with impeccable veracity, drawing fans deeper into their universe from the first listening experience.

Behind black shrouds of obscurity and desolation, the men of Gaerea deliver their odes in cascading maelstroms of aggression and beauty. Emerging from the age of pandemic to whatever awaits humanity next, the Portuguese horde remains on the frontlines of the next generation of extreme metal. With an EP and two albums to their name, Gaerea has rapidly distinguished themselves from the thousands of bands toiling away in the underground. Brewing their cauldron of sound from a recipe of pounding black-metal blast mixed with a touch of harrowed, reflective longing, many devotees of the darkened arts have flocked to their banner. 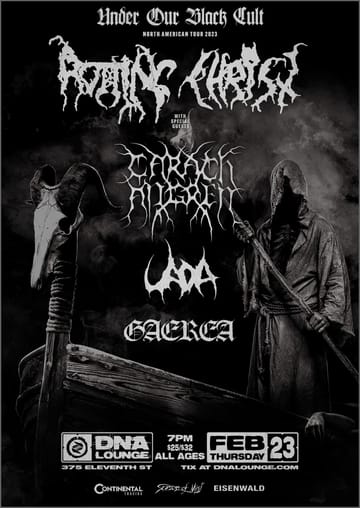