Kidclark
Nixxi
Hydrolyphics
Miico
The Juice Box DJs
After crossing the 2022 finish line, San Francisco's only monthly psychedelic trance night, Secret Psychedelica, brought in 10 international psytrance producers, 17 domestic psytrance producers, and a whopping 108 DJs over the course of 14 parties at the DNA Lounge! 2023 will continue in the same direction in efforts to keep San Francisco's psytrance scene going strong! This month's show will host an all Aquarius lineup featuring another veteran of the global psytrance scene, Boom Shankar of BMSS Records!!

German based DJ, Boom Shankar, got his start in the early 90s when goatrance and psytrance burst onto the electronic dance music scene. Through the years, his impromptu sets have drawn on his experiences from underground and major events all around the world and is a reflection of the constant melting pot of fundamental psychedelic trance characteristics. Boom Shankar's understanding of musical energy flow allows him to interact personally with each dance floor and takes his audiences on transformative journeys. When he's not globetrotting and performing in various countries, Boom Shankar manages BMSS Records, one of the top psytrance labels in the world and home to Manmademan, Sabretooth, Triceradrops, and many more talented musicians. If you want that clearly distinguishable, groovy and hypnotic psytrance sound that brings a sense of freedom, you best be at Aquarius 2023 for Boom Shankar's first time back in the US in over six years.

The evening will also include music from hometown DJs and producers Liam Shy, Lostmemory, and Synwrks. Liam Shy has been one of San Francisco's psytrance champions for well over 15 years and has been our go to Aquarius DJ since our first Aquarius psytrance party in 2018. Liam's sets always electrify dance floors and the spirit he brings to any gathering is immeasurable. Full of passion and pure love for the music, Liam brings everything he has to the table and delivers full-on psytrance like no other.

Lostmemory is Brazilian producer and Space Journey Records artist, Fred Torres. His live set will lead the way into a parallel universe by way of modular sounds and transcendental, enigmatic voices. With his rich musical background from his native country and extensive knowledge of audio production, Lostmemory will introduce a new and fresh psytrance sound to San Francisco for his Secret Psychedelica debut.

Already an established name with Secret Psychedelica parties as the visual artist for the Scorpio, Virgo, and Leo parties, Synwrks will make his first appearance as a multi-media DJ to start the night at Aquarius 2023. In fact, he will be the first Secret Psychedelic artist to handle DJing and VJing simultaneously since the club night started in 2001. His musical sets are as fluid as his visuals and will surely get the party activated with a smooth progression of tunes.

If that doesn't already fill Ganymede's cup, the second room will host Aquarius DJs Kid Clark, Nixxi, Hydrolyphics, and Miico who will bestow the healing vibes of house music and drum & bass. 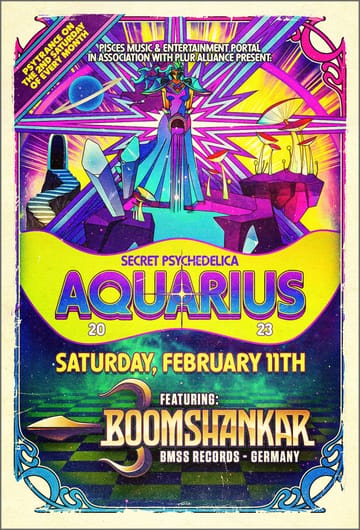