DJ Sep
Speakeasy Ray
Justin C
Connectionism
Aaron G
As we enter the winter season, Secret Psychedelica brings in a new year of psytrance starting with the Capricorn party! To get things heated up on the dance floor, the first of three winter Secret Psychedelica nights will feature the return of Electronarcosis of Psytribe Records and Random from Sculpted Sounds. These two hardworking psytrance producers will be joined by a carefully curated lineup of local Capricorn DJs.

Last year's Capricorn show stealer is back to make the walls shake and your senses vibrate! Please give a warm California welcome to Electronarcosis! Since Capricorn 2022, Electronarcosis has been keeping busy performing at many of the premiere US psytrance and techno events including the Lisha Festival, Freakshow, and Burning Man. When he's not out entertaining the masses, Electronarcosis is toiling away in his Reno NV based home studio attempting to outdo his #1 charting album, Transforming Experiences. With the peak time slot this year, there's no doubt that Electronarcosis will deliver a wild and twisted ride with his unique sounds and infectious energy!

Hometown hero and fellow sea-goat, Random, will cater to those in need of that mind-expanding vibe! Random is quite possibly one of the greatest of all time San Francisco psytrancers having carried the psytrance torch for over a quarter century as producer, DJ, and event organizer. On the production side of things, Random has released four cutting edge albums and appeared on countless compilations released by labels such as BMSS Records, PsynOptiz Records, and Star Active Records. His crunchy yet groovy psychedelic trance sets have been known to bend space and time. There is a reason Random has gone on to succeed in the local psytrance scene and it will be on full display at Capricorn 2023!

Also traversing the psychedelic frequencies in the main room will be Artimus Prime of Opulent Temple and a dawless live set by Aquamoon. In the second room, Capricorn DJs Speakeasy Ray, DJ Sep, Justin C, Connectionism, and Aaron G will deliver the exquisite sounds of house, techno, and drum & bass. 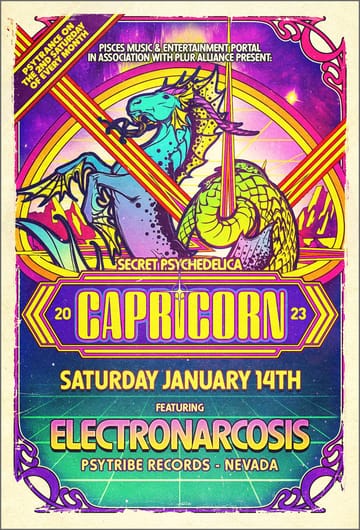