Jen Symmetry has loved drum and bass for almost two decades, playing at clubs, parties, and festivals, where she regularly offers support for international headliners, recently including Aphrodite, Roni Size, Sam Binga, Ternion Sound, Nikki Nair, Anna Morgan, and Replicant to name a few. Her high-energy, precise performances have also recently earned her headlining spots of her own around the country. As a producer, Jen creates melodic bass-driven drum and bass and jungle, has releases on Vibe Raiders and Forefront Recordings, and is looking forward to new tunes making their way to label releases in the near future.

During the pandemic, Twitch provided an outlet while gigs were on hold, and after a year and a half on the platform, she gained recognition by winning the title of 916 Junglist/Dystopia DJ Battle champion and acquiring a nomination for Best Newcomer in the Twitch Breakbeat Awards.

Tally G, behind the decks off and on for the past two decades, has been playing DnB just a few years, a bit more than she's been throwing shows with her crew Dnbtherapy in El Paso, TX. She is one half of Hologynic and one half of Tex n Bass. She holds residencies with Boomslang Recordings (#Usdnb), Siren Project, Proper Chicago, The Distinguished (CO), Syncopation (AZ), and Thc Kru (#Usdnb). Tally G is also on the board of directors for Siren Project. She has played around the United States and is currently learning music production.

Operating in the bay area music scene since 1994, Roman Robb, aka The Doctor, has become a staple in drum and bass. Starting out as a friend and promoter of LiquidvinylDJs, The Doctor's love of quality d+b made the transition from promoter to DJ an easy and logical one. Six years after entering the scene and solidifying his desire to share music that moves him, The Doctor began DJing. His hard-hitting beats, heavy basslines and energetic style make him a force with which to be reckoned. These days, The Doctor stays busy by continuing to deliver his drum & bass prescription at every show he plays at. Need a drum & bass vaccine? The Doctor is the one to call!

Mac Sabbath DnB is comprised of Bay Area DJ veterans Autopsy and R3M. This tag team of Junglist tacticians has been slaughtering dancefloors from San Francisco to South Lake Tahoe with a signature brand of neuro terror. Make sure you have taken your vitamins and are fully hydrated on the dancefloor when this group performs. You have been warned.

Screwtape landed in the bay area DnB scene like an alien back in 2015. Making his debut as a DJ at the Dystopia mix contest and quickly became a fixture. With a music background in West African and Afro-cuban traditional music, and a resume of being in bands with heavy drum and percussion such as: The Extra Action Marching Band, TchKung! and Crash Worship; Drum & Bass was a natural fit in style, tempo and complexity. Known for high energy and dynamic sets with a musician's ear, he always gives 150% behind the decks. He holds multiple residencies with bay area crews Dystopia, Shelter SF and the Church of Drum & Bass. He is the 2020 916/Dystopia Battle Champion. 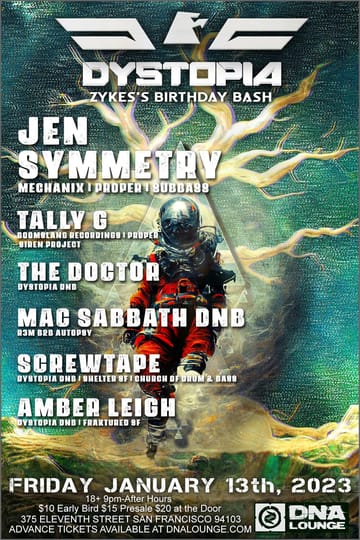