Bleeding Priest
Welcome to the Unholy Sabbath: a monthly showcase of the finest Bay Area Metal bands presented by Insipid Productions (aka The Pound SF). Our goal is to embrace the community aspect of the Metal community. Come hang out and watch your favorite local bands on the big stage at DNA, discover new talent and have some drinks with your friends. Support Local Metal! 🤘

Phantom Witch was founded by drummer Q Minor in 2012 as "Phantom", taking inspiration from Heavy Metal Greats such as Slayer, Testament, Exodus, Death, & Pantera. The band was joined by metal underground veterans Travis Ochoa, Zach Cox, Matthew Ramos, & Erik Hernandez, solidifying a lineup that would go on to dominate the north bay metal scene. Pushing the speed, intensity, and chaos up to 11, Phantom Witch would go on to represent the Bay Area at the Wacken Metal Battle National Finals in 2022, heralded my metal royalty like Steve "Zetro" Souze (Exodus) as "The future of bay area metal."

Gürschach (pronounced: Ger-shock) is an experimental metal band from the San Francisco bay area.Founded in 2011, Gürschach seeks to create an unfamiliar, yet captivating experience for the listener. The group blends metal, latin, sludge, progressive, punk, and jazz elements to create a new sound that they describe as a simple phrase: Dark Matter. Their songs aim to defy the status quo of metal, as a lot of the material was conceived to stand against what a typical metal song would sound like. You can expect to hear anything from harsh screaming, clean vocals, fast head smashing rhythms, slow droning sludge, crowd pleasing sing-alongs, and sanity destroying fringe sometimes all in the same song.

DJ Bleeding Priest: Known worldwide for his day job, the drummer of Bay Area Thrash legends Death Angel, DJ Bleeding Priest (Will Carroll) will be playing his fav tracks from his extensive Metal vinyl collection between the bands and after the show. 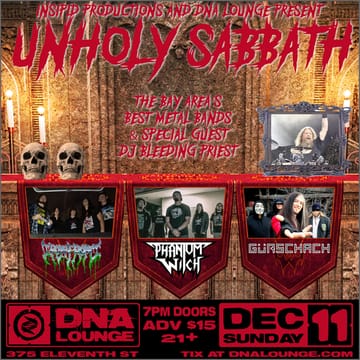