Julien-K
Priest
Plus guests, TBA!
Julien-K is a side project for electronic music created by Amir Derakh and Ryan Shuck from Orgy. Nearly four years after their previous outing, Julien-K are back with their fifth studio album, Harmonic Disruptor. After a successful Indiegogo campaign that saw the funding goal for the record being reached within the first 30 minutes of it going live, it's been a gruelling two year wait. As the old saying goes, good things come to those that wait. Commencing with familiar territory, title track "Harmonic Disruptor" brings the record to life. The adrenaline burst hits in an instant, as a flurry of synths lead straight into gritty riffage. Heavy hitting, the song captures sensibilities of old-school and modern industrial rock in equal measure.

The mysterious band Priest from Sweden will throw you into the neon lights of 80s sci-fi mixed with gothic soundscapes. Since their first single in 2017, Priest have gained millions of streams, an ever growing fanbase and worldwide praise for releases such as "New Flesh" and "Cyberhead" Priest is made up of three musicians - Mercury, Salt and Sulfur. Mercury is the vocalist; he was known as Water while the bassist in Ghost. Salt plays keyboards and was the keyboardist in Ghost known as Air. Sulfur is an additional keyboard player and programmer. And not only is two-thirds of the trio ex-Ghost, but their upcoming third album is produced by Simon Soderberg, the engineer behind Ghost's Opus Eponymous. 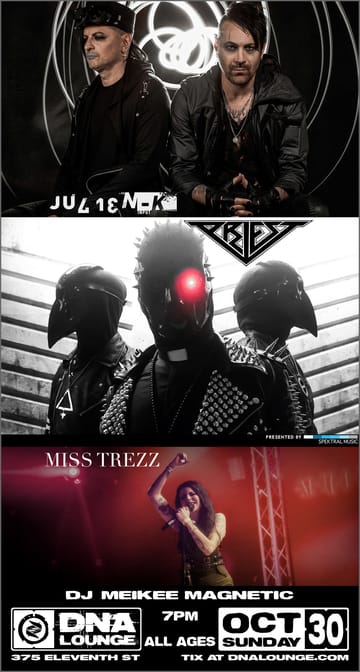