Nako
Crxckwhxre
In any map of electronic music, Front 242 will inevitably sit somewhere close to the center. Taking their lead from the British industrial scene of the mid-'70s, the Brussels-based group - which has included seven members over the years - set out on a path of exploration and innovation that has continued to the present day. Best known as the forefathers of Electronic Body Music, Front 242 signed to the Wax Trax! label and toured America in the '80s, making a profound influence on younger generations of electronic musicians and even reaching 13 on the Billboard dance charts in 1988 with "Headhunter."

Based in Stockholm, Kite is a duo composed of singer Nicklas Stenemo, who grew up in the small town of Stenslanda and keyboard player Christian Berg who came from the even smaller town Tranås. After performing with various synth/indie outfits separately, they finally joined forces and started Kite. The opening track of their first EP, 'Ways to Dance', was an instant club hit in Sweden.

Their live experience - featuring spectacular lights, breathtaking projections and sometimes cat statues shooting laser beams from their eyes - have gained them a reputation as a great live band. This is how Dagens Nyheter, one of Sweden's main broadsheets, described one of their shows "Projected on the dome over our heads are marching skeletons, hummingbirds in slow-motion, bomber aircrafts on a purple sky, lunar craters, the snow-covered peaks of Himalaya, neon shimmering nebulas and a space baby à la Kubrick's 2001. The Native American dream catcher dangling from Christian Berg's synthesizers must have been switched to reverse."

Upon first glance, Rein cuts a devastatingly industrial picture: a Borg-like, futuristic, mechanical being of unknown origin. When you dig deeper, part of the mystery is a revealed - a Swedish girl with a musical family and a penchant for dark electronics, Rein has been genre bending since her 2016 release "Freedoom." Her latest efforts, dub remixes from her debut Reincarnate, was produced by popular German DJ/producer Boys Noize. Rein's music embraces the best of the electronic subgenres, industrial in appearance but with a hard-edge that recalls the Ebm of the 80s and the more recent but still a life time ago sounds of early 2000s electroclash like The Rapture. Rein transformed at some point from a typical blonde human into the interesting machine you now see before you, aggressively yelling her truth while owning the stage. Her voice can switch from a terrifying shout to robotic pop music to a sung melody with ease, all of which are a joy to hear. 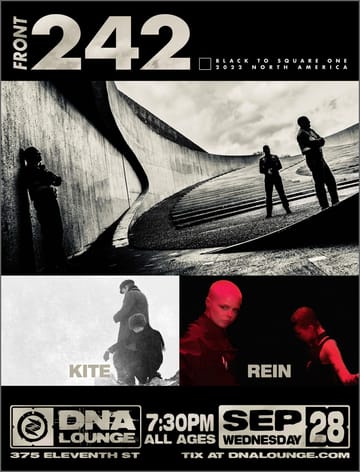