Bad Syntax (Adam Audio / Viper / Formation / Close2Death / Mayan / Abducted LTD, LA)
Lucy Stoner ( Does It Bang / 5lowershop, Oakland)
The Doctor
Amber Leigh
Screwtape
R3M
Take back your freedom and join us for a special Friday night of Drum and Bass right in the heart of San Francisco at DNA Lounge. Come get 'baptized' to the sounds of Drum & Bass champions from all over the sprawl!

August equals Massive talent that we are pleased to welcome to the Bay Area.

"Drum & Bass has always been a music genre that is predominantly dominated by the United Kingdom and Europe, but times are definitely changing as artists based in the United States are becoming more prevalent than ever before. With US based artists releasing records on major labels, traveling and performing throughout the UK and EU, the US is no longer just thought as a touring stomping ground for international acts but a Nation with a growing fan base and a hungry new generation of talented producers.

Generally overlooked by promoters, party goers and the general public, the United States has quietly and quickly produced an excess of talented artists from coast to coast that the world definitely needs to know about..."

Founder of Abducted Records and Abducted Ltd, Los Angeles Drum and Bass badman Bad Syntax has been making noise in the Usdnb scene for over 2 decades. Whether it's being direct support for various international artists such as Jade, Planet of the Drums, Black Sun Empire and many others around the country, or working closely in the studio with the likes of Skynet, Chris.Su, E-Sassin and others, you know when you see his name it is synonymous with quality Neurofunk. You can now catch his live 3 deck Neurofunk sets weekly on the Best Drum and Bass Podcast which garners up to 27,000 downloads month and features guest mixes from a range of artists such as Mefjus to Benny L and everywhere in between.

Lucy Stoner has been a part of the underground American rave scene for over two decades. Co-founder of the Does It Bang crew and long-time member of 5lowershop Soundsystem, Lucy Stoner is known for her "Aggressive Booty Music" style consisting of heavy bass, broken beats, donks, airhorns, acid, and amens with a side of rave stabs and a healthy dose of all things booty. She's played at shows and been featured on various radio programs and streams all over the UK and the US. No butt is safe when Lucy Stoner's on the decks. 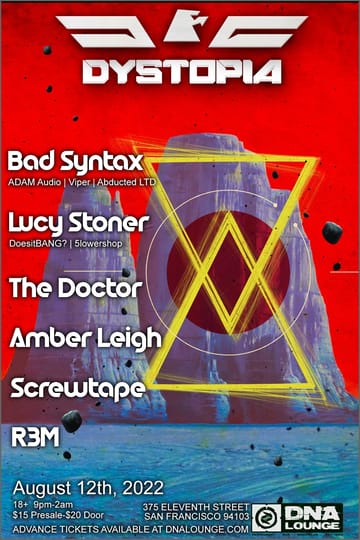