MC Chris
Crunk Witch
Plus guests, TBA!
MC Chris is one of the artists most closely associated with the Nerdcore genre. There was a point in time when he was hesitant to accept the nerdcore label, and described his music as "a genre in and of itself". He was concerned about limiting himself to such a narrow audience and subject matter, but has since grown to embrace the label. He has appeared in countless news stories dealing with nerd culture and nerdcore. Speaking about nerd culture, he says, "It's nice that a lot of folks consider me part of it. It's actually embarrassing how I used to think I was the only one playing with Star Wars toys and making music, and it just wasn't true."

He has appeared on, worked behind the scenes on, and contributed original lyrics to, many Williams Street Studios shows on Adult Swim, most notably Aqua Teen Hunger Force. He was a production assistant and starred as the character MC Pee Pants in the show, as well as in the in the PlayStation 2 video game Aqua Teen Hunger Force Zombie Ninja Pro-Am. He also worked on Sealab 2021, as a writer and as the recurring character Hesh Hepplewhite. He worked as a production assistant and writer for The Brak Show, and was a contributing writer for Space Ghost: Coast to Coast.

Crunk Witch is the husband and wife electro-pop duo from Maine that make bangin' beats and rad parties a reality. Their music is a blend of pop, rock, chiptune, and various electronic genres. Many of their lyrics are set in a science fiction reality and involve themes of adventure and romance. The group spends nearly half a year playing shows across the U.S. at a variety of venues including comic-cons, arcades, festivals, and bars. 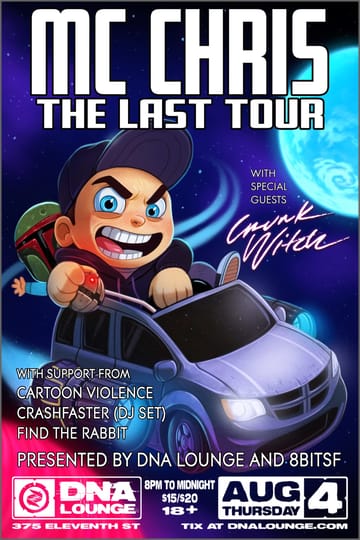