Lisa Rose
SierraQuin
B2Soul
Miss Liv
Marisun
Meanwhile, back on our home planet, we've been hammering away at rescheduling artists that had to postpone their Secret Psychedelica bookings from last year due to various reasons. Thankfully, we've been able to synchronize our calendar with that of Ghreg on Earth (originally scheduled for August 2021) and will be bringing him to the DNA Lounge for a rare San Francisco performance.

Ghreg on Earth has been blowing minds since 1989 with his extremely intense and uncompromising psy adjacent tunes. With releases on his own on3rth Media label as well as Mindfull Records and Wirikuta Recordings, Ghreg on Earth has been forcing listeners to reconsider everything they thought they new about music through five full length albums and heaps of compilation appearances. Brace yourselves for his set at Secret Psychedelica as it's not for the faint of heart!

Joining the fray will be a very special guest and one of the original Secret Psychedelica residents. Please welcome back Mubali of Parvati Records to this edition of Secret Psychedelica. Not only did he hold residency for Silicon Valley's only psytrance night through the mid 2000s, Mubali is also considered one of the pioneers of dark psychedelic trance. Established in 2003, Mubali has taken his unmistakable sound around the world and spawning fans of his music in 29 countries with a fusion of sounds and atmospheres grounded by evocative dance elements. Be prepared for a frenzied, full power homecoming when Mubali returns to Secret Psychedelica for the first time in 16 years!

Kelly Verse of Polaris Presents and Michael Liu from Pisces Music will get the night started in the psytrance room with their expertise and skills as musical story tellers. The second room will feature a combination of banging and progressive techno hosted by South Bay's outstanding and prolific crew, Crooked Legacy. Their mix of veteran and up and coming DJs are sure to get everyone grooving! 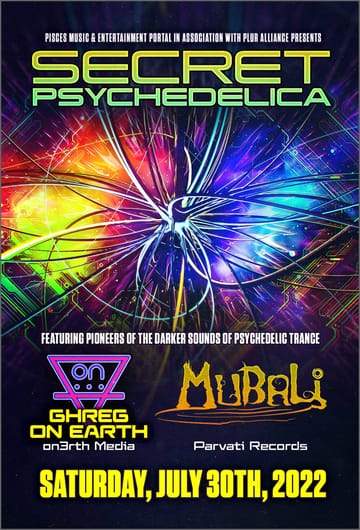