Performers TBA!
San Francisco's sexiest benefit dance show modeled after the long-running NYC "Broadway Bares" show. Follow Pinocchio as he travels through various "Fairy Tales" trying to find out how to become a real boy presented in a series of high energy, fun dances featuring many favorite fairy tale characters who somehow all seem to lose their clothes. The show takes place in the main room and is followed by a VIP party in the upstairs club after the show for VIP ticket buyers.

This fifth annual benefit is a Burlesque-style strip show with a modern twist. We have the best talent from the Bay Area donating their time to perform for a great cause! This "annual striptease spectacular" began in NYC as a way to raise money for essential services for people with AIDS and other critical illnesses across the USA. All proceeds benefit The Richmond/Ermet Aid Foundation - REAF and Broadway Cares/Equity Fights AIDS.

"Broadway Bares," a program of Broadway Cares/Equity Fights AIDS, was conceived and produced by Jerry Mitchell (Tony Award-winning director and choreographer), has been an annual AIDS fundraising event in NYC for 28 years raising over one million dollars annually. Jerry, a Broadway dancer at the time and a strong supporter of Broadway Cares, began to raise funds for Broadway Cares by getting his dancer friends together to put on a strip show in a local gay bar as a fundraising event. His modest efforts have grown dramatically and now "Broadway Bares" is one of the largest annual fundraisers in NYC.

Front of Stage tickets are for the standing-room VIP area right up front, and include access to the after party with the cast in the Above DNA, sponsored by Ketel One Vodka.

VIP Balcony are seats upstairs along the railing, and also include access to the after party. 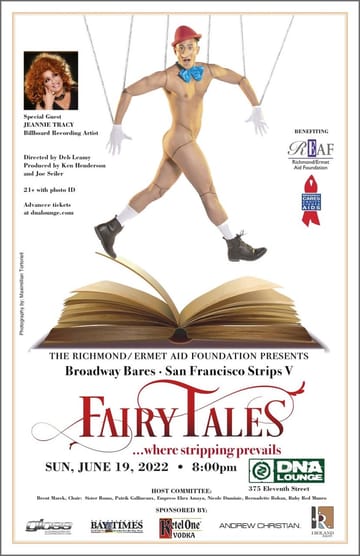