June equals Colossal talent that we are pleased to welcome to the Bay Area.

"Drum & Bass has always been a music genre that is predominantly dominated by the United Kingdom and Europe, but times are definitely changing as artists based in the United States are becoming more prevalent than ever before. With US based artists releasing records on major labels, traveling and performing throughout the UK and EU, the US is no longer just thought as a touring stomping ground for international acts but a Nation with a growing fan base and a hungry new generation of talented producers.

Generally overlooked by promoters, party goers and the general public, the United States has quietly and quickly produced an excess of talented artists from coast to coast that the world definitely needs to know about..."

Dystopia DnB is proud to feature:

Dave Owen is a name that is well known not only in the US but across the world and has a career that spans two decades. Over the past few years, Dave Owen has risen to become one of the most highly sought-after drum-n-bass producers in the United States. His soulful sensibilities have caught the attention of the genre's upper echelon including Ltj Bukem, Fabio, Grooverider, John B, and several others.

Up and coming producer's Zere and Gabriel Habit aka "Knowmans" are hailing from Los Angeles, CA. This dynamic duo has been making waves ever since releases on Randall's Mac 2 Recordings, Code Recordings and Prestige Music Group. Residents of the Los Angeles outfit Big Booty Bass, Knowmans is an act that is sure to be topping charts throughout 2022.

Scotticus Finch has spent years honing his craft, from his beginnings in the Seoul underground, playing with heavy hitters like Bass Attack and Dnbs, to super clubs like Walker Hill and Club Vera. Never one to get complacent, he founded and ran the monthly Mixtape while juggling his various residencies and crew obligations all over the city. Since leaving Korea, he's played all over the world, from radio shows and raves in Germany to East and West Coast gigs in the US. Now based in Austin, he's using his skills to contribute to Texas' thriving DnB scene.

Cofounder of Dystopia DnB (Est. January 28th, 2011), R3M has been riding the waves of the Bay Area Drum & Bass scene and beyond since 2000. R3M is known for Drum & Bass sets that showcase spellbinding neurofunk, power-driven hardstep, classic techstep anthems, syncopated amens, soulful liquid funk and a splash of new school jump-Up. Don't be surprised if you hear a touch of other musical genres that give R3M's style an eclectic feel.

Amber Leigh started DJing in 1999 and is Dystopia Dnb's newest resident. Over the years her versatility and technical skills as a DJ has her continuously booked for a wide variety of genres. Additionally, she works for Zone Magazine, an essential dance music magazine out of the UK. Amber Leigh describes herself as a supporter of local artists. Currently her favorite dinosaur is T Rex but last week it was Triceratops so who even knows. 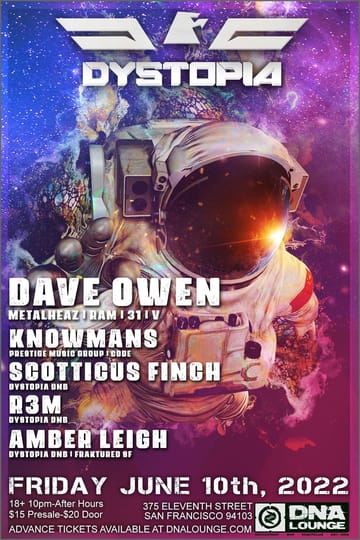