Slackmachine
Betamaxx is an 80's synth revival project by Nick Morey, hailing from Pittsburgh, Pennsylvania. The project was formed in mid-2012 with the release of the "Lost Formats" LP in late September. The name "Betamaxx" was contrived from Sony "Betamax" movie player which rivaled VHS in the early-mid 80's. Betamaxx's sound is inspired and created with a use of a wide variety of analog and digital hardware synths from the 80's and today including the Roland Juno-60, Sequential Circuits Prophet-6 and Ensoniq ESQ-1. Betamaxx focuses on a multi-genre approach to writing, with influences such as The Cure, Tangerine Dream, Boards of Canada, and John Carpenter. He has been featured on such words as the "Kung Fury" original movie soundtrack, and on the Amazon Prime series "Red Oaks".

Supersymmetry is Parallels' 5th studio album, written and produced by front-woman Holly Dodson. It's a 10-song synth-pop daydream, pulsing with classic synthesiser sounds, sonic spells and lyrical transmissions. A Toronto expat, Dodson recorded most of the album in her studio in LA throughout lockdown. In 2020, Parallels celebrated the 10-year Anniversary of their debut album "Visionaries" with a limited edition vinyl repress through NewRetroWave Records. The album sold out and charted on iTunes Electronic Chart. In collaboration with electro-rock artist Radio Wolf, Parallels co-wrote and co-produced a 7-song soundtrack for Sci-Fi feature film "Proximity" directed by Emmy-Award winning VFX artist Eric Demeusy (Stranger Things, Tron: Legacy, Game Of Thrones). The album was released on LA-based imprint, Lakeshore Records and their song "Journey's End" won Best Song In A Film at the Los Angeles Film Awards. Parallels has toured extensively from Stockholm to New York City, and has shared billing with artists including Florence + The Machine, Miami Horror, Glass Candy, TR/ST and YELLE. They can also be heard on the soundtrack of 2013 Oscar-winning short film "Curfew". In Dodson's unparalleled style, Supersymmetry is a deep dive into the heart of Parallels' Universe.

Missing Words is James Meays, Colin Wood, and Jameson Meays. Known for their eclectic brand of synth-pop and energetic live shows, the three-piece band is venturing into uncharted territories. With their forthcoming EP and new live shows planned, they will take an expansive sound and turn it inwards. The new songs deal with trauma, heartache, and growth in a way that only James (Lead Vocals) can summarize. The synth-scape and lead guitars, and rhythmic drums create the atmosphere for which the band can truly create a memorable sound. The future is bright for this young band. 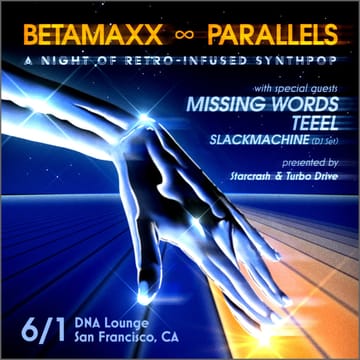