The Buckness
Cheezy
DJ Nancyboye
G8tr
All Aboard the Jungle Cruise! Drum And Bass / Jungle, You Can't Lose!

It's always paradise here. From the imaginations of the Stream Queen, Dream Team, Corrine & Duchess, (Bay Area DnB & Rave Favorites) in collaboration with PLUR Alliance, comes an event like no other! A vacation from the mundane, Jungle Cruise promises to put a refreshing new spin on the genre and scene, all the while celebrating Drum and Bass, From Liquid to Neuro, Jungle to Jump up and Bass Music alike. Whether you are an OG Junglist, or new to the crew, we've got a spot on the boat just for you. If you like sick beats & pounding baselines coupled with hilarious antics and ridiculous fun, look no further. Where the waves meet the rave. Jungle Cruise. Its the one you choose!

Nautical, Tropical and Animal themed dress is strongly encouraged. (We love a theme)

This world is full of perfect pairings: Wine & Cheese, Carrots & Peas, Monkeys & Trees, and BITCH PLZ is one of these. You may remember them making waves in the Bay Area Drum and Bass scene, almost 10 years ago. Opening for such acts as Dj Craze, Pendulum and Andy C, BITCH PLZ is the duo and collaboration of Bay Area Rave DJ/MC, CORRINE (PLUR Alliance, Shelter SF, Fraktured SF) and former SF resident, DJ/Producer/Vocalist, MISS HAZE (Bass Cellar, Ritual Dubstep). Formed in 2013, they quickly gained notoriety and became one of the bay area's top DNB acts. Bitch Plz is also a part of "The DnB Girls" collective, A hand picked crew of some of the most talented and successful woman in DNB in North America. These 2 bad bitches throw down ball busting basslines and as many peaktime bangers as they can stuff into their set, making for a captivating performance.

Hip hop inspired, sexy swag, cascading chord progressions and enough ragga jungle to make you pass the dutchie pon the left handside, BITCH PLZ puts on a show like no other. They have a 'no messing around' sassy style, booty poppin' sensibility and tend to liven up the dancefloor wherever they go. Although life has sent their careers in two different directions (geographically), You can never take the BITCH out of BITCH PLZ and the two of them have maintained some sort of hive mind about music all these years. So, they come together to give you all the throwback anthems, rhymes and routines that you've come to love, including some new tricks up their sleeves, for this ONE NIGHT ONLY performance. Whether you are new to the scene or still have a BITCH PLZ mix CD stuck in your car's CD player, you don't want to miss this very special performance, with B2B DJing, Singing and MCing and all the Festival Drum and Bass you plz. 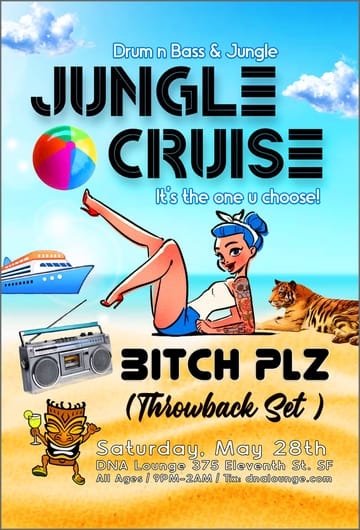