Slater
Madge
Lealani
From seductive club bangers to therapeutic, night-time-cruising tunes, Slater has solidified his role as a tastemaker and star of the new wave of alternative pop. Since 2013, Southern California's rising underground sensation, Slater, has blended the best elements of alternative, pop, and hiphop into a new, unique sound all of his own. Smooth, groovy, and infectious, his niche style is as reminiscent of early 00's pop and radio hits as it is innovative and fresh. As a member of the collective, Vada Vada (consisting of The Garden, Enjoy, Puzzle, Cowgirl Clue, Lumina, and Glitch), Slater is no stranger to experimentation. With over 20 releases under his belt, he continues sonically evolving his signature sound.

Madge is the nonbinary Los Angeles artist breaking hearts and noses in the land of left-of-center. Their world is equally absurd and earnest - cartoonish nihilism born out of Mormonism. Madge's music performance and composition reflects their fluidity and they frequently float between genres. Outside of their own artist project, Madge's writing work ranges from Kaskade to Pussy Riot, dabbling primarily in electronic, pop, and film composition. Debut album in the works, the artist hopes to be part of a bigger wave of change in the music industry with the rise of democratized music creation and easy-access media. Described by Noisey as "weird" and by Bbc Radio1 as "like chewing on toxic waste in the best way", Madge is looking forward to a big 2022.

Lealani is a Los Angeles based artist who is an "alien from Fantastic Planet". 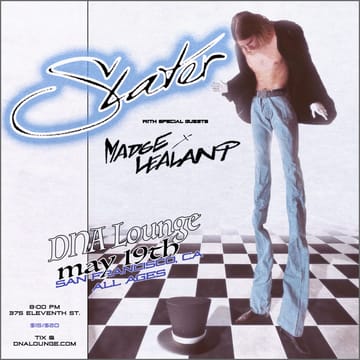