Front Line Assembly
Rein
Plus guests, TBA!
Front Line Assembly's lead man Bill Leeb is three decades into the industrial scene, so rest assured he knows what he's doing. FLA's body of work ebbs and flows somewhere between industrial, dark dance music, and the apocalypse- with so much musical history there is something for everyone. In the 80s Leeb collaborated with Skinny Puppy before founding FLA (along with a multitude of projects), releasing a ton of music (including video game soundtracks), and touring the globe.

Longtime songwriting associate Rhys Fulber is back on board for FLA's latest electro-industrial record, Mechanical Soul, and listeners will rejoice at the old school, sparse approach. The record is a dark, pandemic-influenced one (for example: a track in German about dying alone) that documents much of the past year spent in solitary while revisiting an old song and beloved rivet themes.

FLA has seen many iterations, with each band member adding to the sound during their stay - but this iteration of Front Line Assembly as a duo happens to be the original one. The electronic body music vibes are woven throughout - likely from having two original members back together. It is no surprise that this record is being embraced by old school rivetheads and new listeners alike. Live, there's nothing grandfatherly about Front Line Assembly - aggressive rhythms, goth metal undertones, pounding drums, Bill Leeb stalking the stage with his mic, and Rhys Fulber manning the synths. Just close your eyes and let these pioneers take you away.

Upon first glance, Rein cuts a devastatingly industrial picture: a Borg-like, futuristic, mechanical being of unknown origin. When you dig deeper, part of the mystery is a revealed - a Swedish girl with a musical family and a penchant for dark electronics, Rein has been genre bending since her 2016 release "Freedoom." Her latest efforts, dub remixes from her debut Reincarnate, was produced by popular German DJ/producer Boys Noize. Rein's music embraces the best of the electronic subgenres, industrial in appearance but with a hard-edge that recalls the EBM of the 80s and the more recent but still a life time ago sounds of early 2000s electroclash like The Rapture. Rein transformed at some point from a typical blonde human into the interesting machine you now see before you, aggressively yelling her truth while owning the stage. Her voice can switch from a terrifying shout to robotic pop music to a sung melody with ease, all of which are a joy to hear. 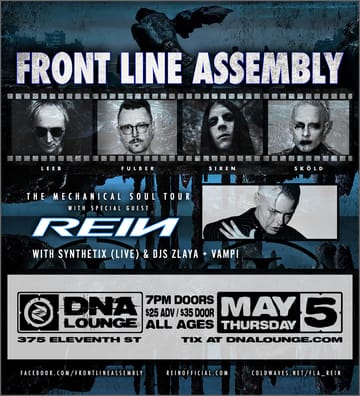