Joey C
Kidclark
Nixxi
Otter
Willow
Secret Psychedelica ended 2021 by bringing a total of 15 international psytrance artists and over 25 US based psytrance producers and DJs to the DNA Lounge from July to December keeping the local psychedelic trance scene going strong in San Francisco! And the only regular ongoing psytrance night in the city will continue to bring top talent through 2022!! In February, Secret Psychedelica brings in Kombat from San Diego, hometown hero Liam Shy, and a superb cast of Aquarius DJs in support.

Quincy Hoss, known to the masses as Kombat, is a veteran of the Southern California electronic music scene. With over two and half decades of experience, he has developed his own unique approach to psychedelic music. His talent for delivering beautifully flowing audio journeys woven with deep, intricate baselines, has garnered him countless bookings, a spot as an Ego Feed Records recording artist, a residency with the seasoned event crew Simpler Times, and the selection by German based Native Instruments to represent their music software and hardware. The dance floor will be blessed with his driving, cutting edge style of psytrance when he makes his return to San Francisco!

Liam Shy began his electronic music career at the turn of the millennium as a producer and DJ. Being a resident for Tantra in the early 2000s, Liam helped introduce psytrance to a whole new audience hungry for that aggressive psychedelic sound. His high energy performances have led to numerous appearances at festivals including Love Parade, Burning Man, and Coachella. Since then, Liam has expanded his role in the scene by helping and teaching up and coming electronic music artists through 1-on-1 lessons and video courses. His set at Aquarius 2019 was ridiculously spirited and powerful so it's with great pleasure that he'll be back for another blast of psychedelic trance!

Additional Aquarius DJs will be supporting these two great acts with their innovative and creative sounds of psytrance in Above DNA while the Dazzle Room will host an all Aquarius lineup delivering the healing sounds of house music as well as the raw and expressive sounds of breaks and bass music.

New rules: You must now show proof of a booster shot if you are more than 6 months from your first round. As of Jan 31st, you must also be two weeks past your booster. 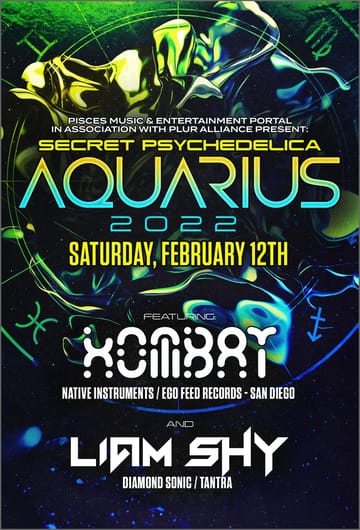