Kool Keith
DJ Abilities
Mophono (DJ Set)
Nebakaneza (MF Doom VJ Set)
You'll have to go pretty far to outweird Kool Keith, a rapper of some 58 alter egos, who for the last 35 years has stood at the front of the hiphop weirdstream. His style sounds beamed back from another planet, strange but not unknowable, an astral bedfellow of the metaphysical creativity of Sun Ra's cosmic jazz. Tellingly perhaps, when Keith told a journalist that he had spent time as a psychiatric patient in New York's Bellevue hospital - a story apparently invented out of boredom - it was widely believed.

Keith first came to prominence as a member of Ultramagnetic MCs, a revered New York group that was a riot of golden age-style dusty funk samples, heavyweight scratching, an outlandish rap style, with a metaphor-heavy polyrhythmic maze of scientific imagery

As Dr Octagon, Keith would cement himself as a rap legend. Relating the adventure of the titular doctor, a nightmarish surgeon/gynaecologist/half shark alligator + half man from Jupiter who performs rectal rebuilding surgery and relocates saliva glands. A surreal bad dream attack of consciousness that sounds like going under heavy gas.

Keith would later contribute to Prodigy's diamond selling The Fat of The Land album. Not only did Keith provide the vocals for Smack My Bitch Up, he was also the MC on Diesel Power. Kool Keith may actually make more sense in 2022 than he has at any other point in his career. It's not just that other rappers have bent to his weirded-out style and adopted his use of internal rhyme, but the growth of lyrical annotation sites such as Genius allows listeners to dissect his metaphor-heavy lyrics in a way that had been impossible for the majority of Keith's career.

Growing up in a family of artists, DJ Abilities had early ambitions of working in the visual medium, but it wasn't until he discovered Hip-Hop that he'd found an art form that he truly identified with, and he immersed himself in all aspects of the culture.

Becoming a DJ at age 17, Abilities went on to compete in the legendary Dmc DJ competition in 1999, and won the regional title, advancing to the U.S. finals. Then he did it again in 2001. Soon after, Abilities garnered attention for performing the scratches on El-P's classic debut, Fantastic Damage, but his name would become most celebrated throughout the 2000's as one-half of the duo Eyedea & Abilities, which would play a prominent role in the burgeoning Indie-Rap movement. Together, the pair developed a near symbiotic creative union that produced a catalog animated by the burning fusion of Eyedea's introspective and technically adept rhymes, with Abilities' precise scratches and versatile production.

2022 finds the DJ/Producer returning to the forefront and embracing an entirely new approach to making music. A departure from previous work that was primarily sample-based, and now opting to build compositions from the ground up.

New rules: You must now show proof of a booster shot if you are more than 6 months from your first round. As of Jan 31st, you must also be two weeks past your booster. 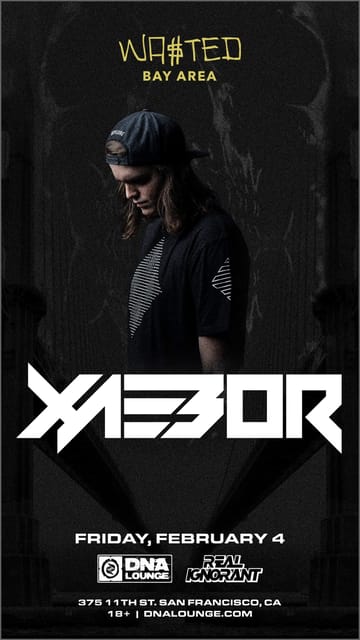