Forest Green
Amber
Clairity
Amber Leigh
Rosheen
While it's well known that Secret Psychedelica brings in top notch international psytrance producers and DJs for the zodiac themed parties at the DNA Lounge on the 2nd Saturdays of each month, every now and then, an extra little secret is revealed. As is the case for the Secret Psychedelica party on January 22nd. This night will focus on the local artists that have been championing the sounds of psytrance and techno for years and have helped build a solid foundation for our San Francisco Bay Area scene. Featured producers for the night are Gizma of Antu Records and Sangoma recording artist Sunchild. They will be supported by a cast of heavy hitters from around the Bay.

If you attended the Secret Psychedelica Libra party, then you know that Gizma can ignite the dance floor with her high vibratory sounds. If you missed that show, now is your chance to make up for it and take in the full Gizma psytrance experience! As a DJ, Gizma has been rocking crowds for over a decade playing numerous events and festivals including the How Weird Street Faire, the Red Marines Music Festival, and Acid Rain. Her role expanded to producer a few years ago with the release of her mind expanding tracks on Antu Records and Starseed Psytrance. We're excited to bring this hometown hero back for an encore performance without having to wait until Libra 2022.

Do you like the darker, harder side of psytrance? Well then, be ready to embrace the rise of Sunchild! Originally scouted for the Secret Psychedelica Leo party but due to scheduling conflicts, we couldn't make it happen. Luckily, the master of the contemporary full-power psytrance sound is able to slip this performance in between his busy schedule as R&D for Star 10101 and producing tunes for labels such as Reversible Records, Quintessence Records, and Mighty Quinn Records. Be prepared to slip into the next level of enlightenment when Sunchild delivers his carefully crafted hypnotic tracks to our unsuspecting ears!

Additionally, residents from San Francisco Bay Area's only regular psytrance nights will get things revved up in the psytrance room. The second room will showcase an all female lineup of DJs we have dubbed with the utmost reverence as the Techno Sisterhood. 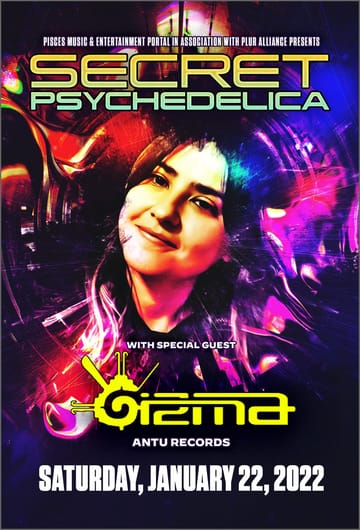