Amber
Jeff Taisch
Terry Estioko
Arwin
Psychic Monkey
Secret Psychedelica continues to bring the best international and out-of-state psytrance artists to San Francisco on the 2nd Saturday of every month with the renown zodiac series of parties. The month of December brings us to the final zodiac party of the year, Sagittarius 2021. To help close out things out strong, a team of Sagittarius from around the West Coast has been called upon. Leading the stampede are Smoke Sign, Khromata, and Freeman! Smoke Sign is the main project of Oregon based producer Krysalis Moon. Primarily known for his bushprog sound, Smoke Sign has conjured up tracks that have helped define a sub genre of psytrance that is prominent in labels such as Zenon Records, Werk It Music, and Fresh Frequencies. These tunes can best be described as audible magic that has combined the sounds of both ancient and modern worlds into a fusion of genres driven by a deep bass groove.

A local hometown hero, Khromata has been a fan favorite around the world for the past decade. Her signature progessive, tech-driven sets earned her the role of label DJ for Denmark based Iboga Records. Her talent for weaving fun and energetic frequencies with uplifting melodies has made her a staple on Dreamstate lineups since 2017. In the last few years, Khromata moved onto producing with a debut track on Free-Spirit Records and assembling well received compilations for Iboga Records. Like a shot from Cupid's arrow, Khromata's music will hit straight to your heart and fill you with love and joy.

A key piece from Southern California's golden age of raves, Freeman brings to San Francisco a pure vibe that embodies the original ideals of PLUR. He is a skilled DJ that is well versed in all the genres of electronic dance music but carries an added passion for psytrance. His enthusiasm for the music and the scene it created pushed him to co-found Underground Sound, an event production company that has produced countless outdoor events from the Angeles National Forest to the deserts of the Mojave for the last two decades.

The rest of the all Sagittarius herd are comprised of talented veteran DJs that will bring the fierce and aggressive sounds of psytrance to the dance floor in Above DNA and the deep, pulsating vibrations of techno to the Dazzle Room. 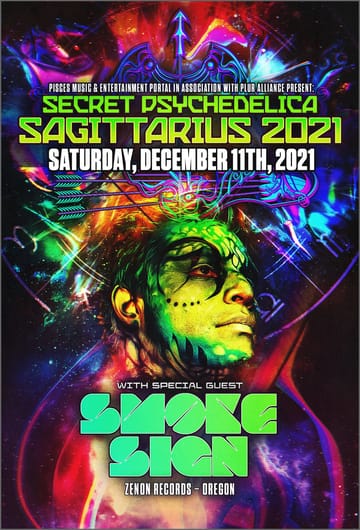