Junkie Kid
Geo
Kasamigos
Tao
Sajche
Fadead
Junkie Kid is a DJ/producer (and all around nice guy) from Mexico who, after spending some years in Europe, has settled down in the artist's paradise of LA. If you want puro hardstyle, Junkie Kid is the man for you. Beats are fast, sounds are hard and dark, and so is the attitude. Don't get me wrong, JK doesn't just do hardstyle dance music! The producer gets around, dabbling in techno and house under the alias 91x and collaborating with Gravedgr as part of the DNB-tinged dark duo Gravekid. He also curates his own label, Harsh Records. As a producer, Junkie Kid designs tracks that weave in a multitude of sounds - from eerie, more melodic layers, captivating samples (just try to resist JK's use of Haddaway), to his signature 160 bpms con todos los kick drums - without ever being bogged down or extra. Do not be surprised if you hear a little of everything during his energy-laden live set.

From the streets of beautiful Long Beach CA, comes Geo - the king of hard trap. Now a grad student (but always a player), Geo hasn't just been doing nothing this whole pandemic. While he could have easily just gotten high and listened to the Cure, our boy Geo has been playing radio shows and live streaming and creating new beautiful sounds and collabs for our pleasure. And let's not forget that this DJ has been masking up since long before the rona hit! Geo has been making hard dance beats for years, coming up with artists like Bear Grillz and Dubloadz. Mixing live is where he shines (perhaps due to those times that he DJd a quinceañera), bringing together music of all genres under the comforting rhythms of EDM. Live mashups are like a game of spin the bottle: you don't know if you're going to get old school hiphop or a classic norteño song or a Mana hit (that your mom would love) smoothly mixed into hardstyle electro, but if and when you do you'll be happy about it. Expect lights and beats that go a million miles a second. 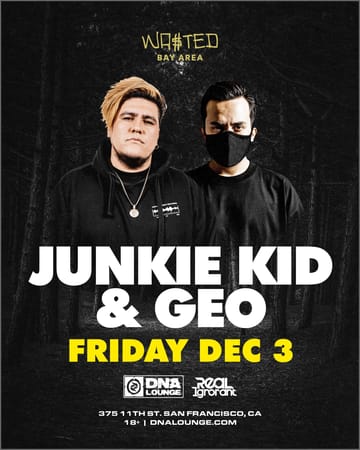