Rick Barzell (all vinyl set)
Little Gris and Psyched! Radio present a night of Rock n' Roll music and dance party. Be prepared for a night of hip shaking music and heart pounding rhythms to get you moving on the dance floor.

Bolero is a San Francisco based rock band that performs what they refer to as "FREAK-FLAG-MUSIC". Inspired by the bands of the late 60s and early 70s, The group produces a dynamic and rich range of compositions that ride the sharing borders of blues, jazz, soul, rock 'n' roll, folk, country funk, Latin and psychedelic music. They have shared the stage with such acts as Big Brother & The Holding Company, Asteroid Spindrift, and Love-revisited featuring Johnny Echols.

OC Hurricanes: Indisputably the greatest Chicano rock band out of Santa Ana. The Hurricanes are a crossover group influenced by Rock n' Roll, soul and rhythm & blues. The blend of influences, combined with their own Mexican roots, makes for an intoxicating musical experience bound to drive any crowd wild!

The Premonitions: Wild! Far Out! LA's hottest garage act that will get in your head and make it spin! From central Los Angeles, the five-piece draw influence from all across the board and are truly keeping Rock n' Roll alive and well. Think The Sonics meets early Rolling Stones and Kinks. They're an amazing outfit not to be missed!

The Killing Floors: LA based five-piece ensemble creating & performing 60's-influenced Rock n' Roll. Expect to hear---heavy fuzz guitar, pounding drums, melodic organ, bass lines that will have you moving and incredibly belted out lyrics that makes for a guaranteed energy to the stage. 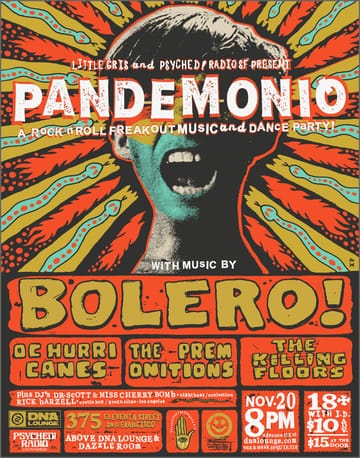