Anthony Zmoda
DJ Smokie
Tim Stephanic
Eddy Moran
Vilca
Secret Psychedelica introduces the San Francisco Bay Area to the best international and domestic psytrance artists with the Zodiac series of parties on the 2nd Saturday of every month. For Scorpio season, our claws have reached out and grabbed Megalight and Paradigm to bring to the DNA Lounge.

Megalight is the hottest psychedelic trance export from Mexico right now. Having released numerous tunes on labels such as Nutek Records, Fineplay Music, and Quantum Sorcery Records, Megalight has established herself as one of the leading producers in Latin America. Behind the Megalight project is female DJ and synthesist witch, Paulina Dávalos. Based out of Guadalajara, Paulina has already toured the world as a DJ and is now taking Megalight to the next level with a unique performance that blends powerful and driving flavors of psytrance with her mesmerizing vocals. Scorpio 2021 will feature the San Francisco debut of the live Megalight experience.

Originally from the Monterey Bay Area, Paradigm returns to the DNA Lounge from his headquarters in Los Angeles. Not only is Paradigm an accomplished DJ in the US psytrance scene, he has helped build its foundations through his work as a label manager and promoter. Sculpted Sounds, a top US psytrance label that Paradigmed founded, has been at the cutting edge of the genre, pushing the sounds to new heights with each release. As an event organizer, he has been an instrumental piece in events produced by Pulse SF, D.E.A., and Straylight Productions. Expect nothing less than an immaculate full-on set from a prime example of the top evolution of a psytrance DJ when Paradigm hits the decks.

The remainder of the lineup will include more Scorpios to back up the featured acts with DJs carefully selected to bring the intense, complex, and deep sounds of psytrance in Above DNA and the darker, cryptic, and more underground sounds of techno in the Dazzle Room. 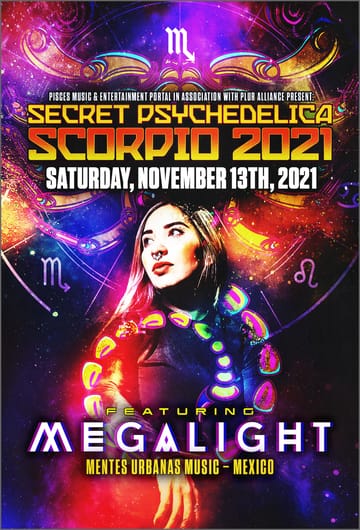