Oolacile
Aweminus
Neonix
Digitist
Jystdoe
Heavy, relentless rhythm is Oolacile's bread and butter. The sound designer/DJ (SoCal native Cooper Medearis) may be young, but he's already carved out his own dark dubstep niche in a few short years. A certain level of darkness is expected from a producer who takes his name from a lost, cursed land in the video game Dark Souls. Experimenting is the key to Oolacile's signature bass music: crunching and distorting until a once-simple sound until it evolves into an aggressive earworm. Evolving is just what Oolacile is good at - while he's constantly crafting new heavy treats for your ears, he also embraces the melodic side of EDM. And, unlike many dubstep auteurs, doesn't balk at using the word riddim - as his track "riddim girl" proves. But don't call Oolacile a riddim artist - he's much more than that. Somehow he blends the harsher, more repetitive riddim sounds with something completely different. His newest releases harken back to old school happy hardcore, catchy enough to get the dancefloor moving at a clip. While his sound is hard to pin down, one thing is certain: Oolacile is a creative force - and after so many months at home you won't want to miss him doing his thing.

Let's get one thing out the way: Aweminus (aka proud pug owner Brandon Famini) is pronounced 'ominous.' Purposefully misspelling a word to make a moniker is a common EDM trope, luckily this one fits like a glove. Dark, riddimy grooves mix with heavy bass to create a little something for dancing, a little something for partying, and should please just about any basshead on the dance floor. His versatility and likeability shoudn't surprise anyone when you consider that Aweminus is the auteur of "Riddim 4 Dummies." The DJ/producer does not disappoint when it comes to riddim sounds - but don't pigeon hole Aweminus. He sprinkles in just about every dubstep genre during his live set, and his dabbling pays off, especially for drum n bass fans. Aweminus has been busy (as you can be) during the end stages of this pandemic - recently breaking the seal of isolation to crush a set opening for ATLiens. 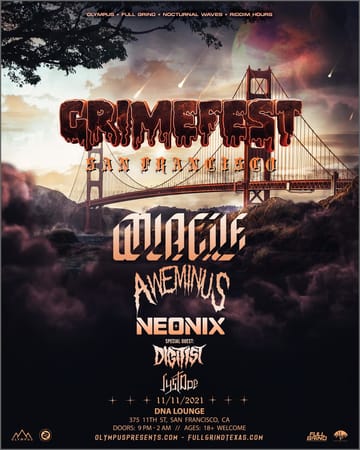