Trampa
Oddprophet
Jinx
Looking like a heavily-tattooed, modern version of Johnny Depp in Cry-Baby, Trampa (real name Rikki Moore) is a UK DJ/producer known for his gritty dubstep. And like a true rebel he designs sounds for himself first and foremost, coming up with a lot of unexpected tracks on his LP that stand apart from his earlier work. When it comes to Never Say Die artists we expect certain levels of grime and grit, a little danger and darkness, and fun, big name collabs. Trampa doesn't disappoint. It has been a big year for Trampa, with his debut hitting the internet and tour dates finally coming to fruition after pandemic-imposed time off. After months with no dance floor input, Trampa has created something that isn't just for the club or festival stage (don't get me wrong, they'll hit hard live). He walks a fine line between traditional dubstep bangers and a genre-bending good time for all EDM lovers, incorporating riddim and DNB. After so long without live shows, expect Trampa to work out any remaining pandemic depression on the audience.

Admission for one to every one of DNA Lounge's Halloween parties! This ticket admits one person to seven parties over five nights: Sequence, Star Crash, All Hallow's Eve, Booootie, Technolatry, So Stoked and Death Guild! (Note: one person, five nights. This does not get five people into one party on the same night, or any other combination.) 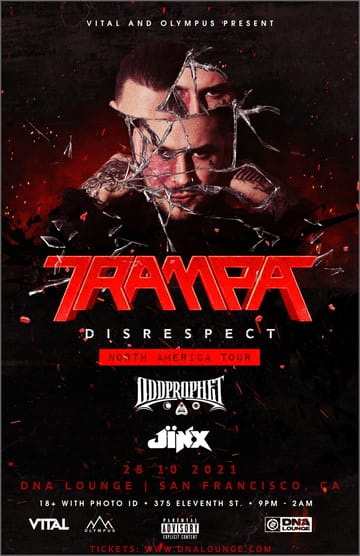