Riot Ten
Ace Aura
SweetTooth
If you like alien light shows, sick drops, and more hype than you can handle - El Paso's Riot Ten (real name Christopher Wilson) is gonna be your idea of a good time. Riot Ten has been making music since the ripe old age of 15, and producing for hiphop acts. All that legwork paid off in 2017 when his track "Rail Breaker" earned heavy play on Beatport and in live sets. Since then it's been touring, touring, (this year he gets to play Lollapalooza!) and creating hype new tracks. The DJ/producer is earnest! He goes hard and brings heavy bass, amping up the crowd with not only his set but his entire being. And with his ties to Dim Mak (along with a slough of cool labels and artists in the EDM world due to collabs, touring, and general friendliness) you know he is gonna give the crowd that party music. Equal parts trap and dubstep, with a generous sprinkle of hiphop energy and electro and a little dancehall if you're lucky, Riot Ten has something for just about every electronic music lover.

Because antivaxxers have ruined it for everybody, you will be required to show proof of full vaccination before entering DNA Lounge: either your original CDC Vaccination Card (not a copy or photo); or the CA DPH Vaccination QR Code, downloadable from . A valid, government-issued photo ID is also required for entry. 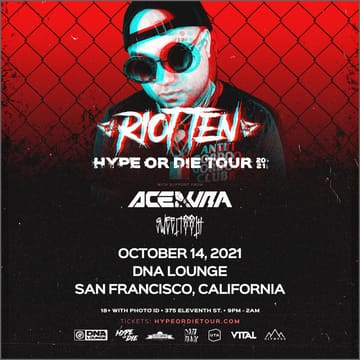