Infusion
Paucus
Handsome Dodger
Michael Liu
Secret Psychedelica continues to showcase the best in psytrance from internationally renown producers to our favorite local hometown heroes. On August 28th, Secret Psychedelica puts the spotlight on Pharmacy Music and Sculpted Sounds recording artist No Cliu! Making an exclusive trip to the San Francisco Bay Area, this will be No Cliu's first time back since his psychedelically insane set at Sound aPSYlum and killer performance at Khromata Nights 5, both in 2018. His unrestrained and relentless approach to production has lead to numerous releases on Christopher Lawrence's label, Pharmacy Music, as well as collaborations with some of California's leading psytrance artists including Triceradrops and Strange Cookies. In fact, his bold sound has led to remix requests from many big time producers such as Life Style, Magnus, and Tektrix. With the way the world is going these days, we may have no clue as to what the future holds for the human race here on Earth, but one thing is for sure, No Cliu's fantastic full-on audio overload will help us transcend to another planet, even if it's just for one night.

Infinite Sun of Pulse SF, Kelly Verse from the Polaris Presents collective, and the Secret Psychedelica resident DJs will be comprise the remainder of the lineup for the psytrance room. With each DJ bringing their signature sounds to the table, music for the evening will be next level from beginning to end.In the second room, we'll be celebrating the 17 year anniversary of Pure Vision with a collection of resident DJs from the annual Northern California event. Since this year's Pure Vision campout has been put on hold, this will be a way for Pure Vision and Higher Conscience friends and family to share in love, laughter, music, and dance. Infusion, Paucus, Handsome Dodger, and Michael Liu will be bringing down the house with their diverse sounds of techno and breaks. 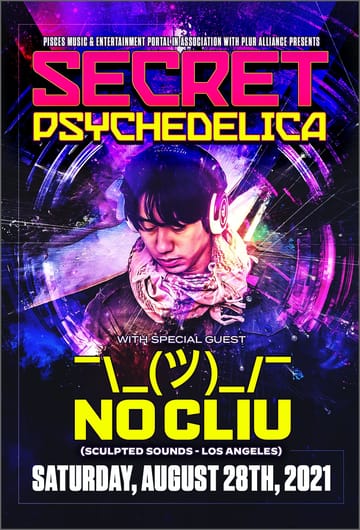