Beverly Chills
Gia
Kitty Komforts
Marxoxo
FAKE and GAY is back at our home first Saturday's at DNA! Featuring a dj set from the dreamy and futuristic sounds of Doss and live performance from emerging pop star, hostess of Slag Wars - Chase Icon!

Doss makes dance music like a daydream of nights past, equal parts euphoria and ennui. An underground fixture in music and design, she has also made major fans of big-name artists like SOPHIE, with whom she toured in 2018 and had an ongoing collaboration, and Porter Robinson, who helped Doss trend on Twitter when she played his Secret Sky festival. Last year, Lady Gaga highlighted Doss on her Women of Choice playlist for Apple Music and featured her as a DJ at her album release party, in collaboration with PAPER. 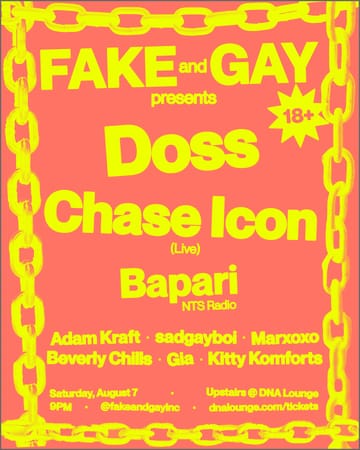