Xanubis
Vtizzel
Canal Knight
Liam Berry
Seb707
DJ Lowkey
Xanubis is an alternative Hip Hop artist from San Francisco. His music explores the contrast of his hedonistic and nihilistic exterior; and his passionate, romantic interior, as he reluctantly accepts his fading youth.

Vtizzel is an artist who doesn't appreciate censorship for the sole reason of his beliefs of free speech. The lyrical acrobatics and serious topics of Vtizzel are sometimes intimidating to the average listener. While understanding many people have emotional triggers, Vtizzel aims to talk about some of the most uncomfortable topics; in hopes to bring awareness to messed up situations and ultimately create a community of good mental health. Vtizzel wants the best for the world, even if the world may not know the best for themselves.

Canal Knight is an Electronic and Hip Hop Artist based in the San Jose bay area. Inspired by the art and community that raised them, Knight hopes their music makes people move while pushing the genre of hiphop/rap in both a progressive and unique directions.

Liam Berry is a San Francisco native multi-media artist who works mainly with Music and Visual Arts. Musically, he takes lots of inspiration from many different sub-genres of Jazz, Brazilian, Hip-Hop, and Indie music and blends all these unique sounds in his written music and general playing style. Liam's visual art revolves around abstract colors, shapes and designs, while he does play with different techniques, he is known for his Graffiti/Keith Herring inspired style of linework which can be found in most of his work.

Seb707 is an artist out of the bay area who is fresh and new to the game. Influenced by G funk, trap and Anime, the beats are a mix and blend of the sounds that he made himself. Seb707 has worked with small local artists for several years and is self taught from making beats to mixing and engineering. Dropping a few beat tapes and collabs this is He's first rap tape to ever release.

DJ Lowkey is a Bay Area artist specializing in local underground Hip Hop. They were born and raised in San Francisco, in the heart of the Bayview district, and have a strong love for unique sounds. They hope to open people's field of view with music as a means and a method. 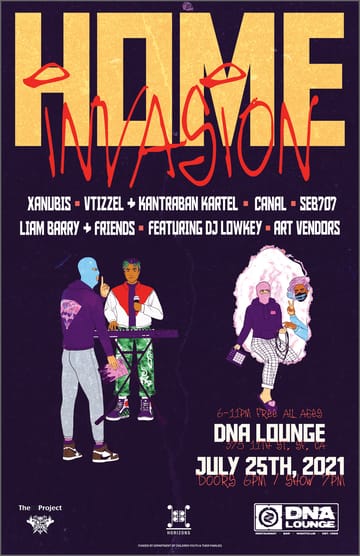