Monxx
Plus guests, TBA!
It's been years since we've partied with Monxx, the British DJ and producer known for his signature wonk sound and past controversies. Now a proud Californian, Monxx (aka Josh Carling) is celebrating the anniversary of his debut album by releasing it again as the World of Wonk VIP - now with even more wonk! Monxx has been on the scene for more than five years, hopping between bass music genres like dubstep, house, riddim, and grime with ease to create his wonky calling card: in the process making the word wonk and the name Monxx inseparable. The DJ/producer spent his quarantine vaping, hiking Catalina, evolving his sound, and waxing nostalgic - the last being super handy for his VIP release. His VIP doesn't just rehash his greatest moments, it completely changes the tracks making this EP a must have for old fans and a good starting place for new ones who just want (or being that we've been isolated for so long, NEED) to have a good time. Expect an over the top good time (neck wobbling, riddim fingers, non stop beats) as Monxx works a crowd that has been cooped up for the last year. 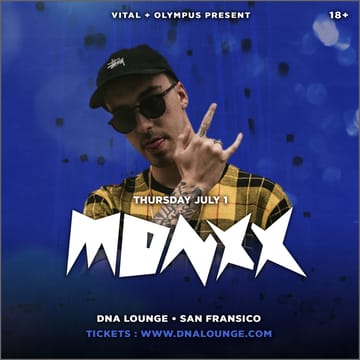