Join us as we celebrate 🏳️‍🌈🏳️‍⚧️ Pride Saturday for the first of our 18+ nights at our new home upstairs at DNA!

Honey Balenciaga is a dancer, actor, and movement artist from Brooklyn, New York. As a kid, Honey always wanted to be more, see more, and feel more. Their love for dance began at an early age as Honey soaked up movement they saw in film and television. Emerging into the ballroom scene as a teenager changed Honey's life forever and opened them up to a new genre of freestyle movement. Creating "Honey" allowed them for the first time to see the world in color; a world that could allow them to embrace their femininity, release stress and live a fantasy. Honey's formal training comes from Dance Atlantic Studios and The Door in New York City. They were apart of Susanne Bartsch's Love Ball III and Rupaul's Drag Con, and more recently have blown up as a fan favorite on MAX Original's LEGENDARY!

Bapari (aka Arielle Baptiste) is a Haitian-American musician, producer and DJ. They have released music with Popcan Records, Mollyhouse Records, Chroma NY, XXIII and Internet Friends. In addition to producing for a number of recording artists, their debut solo EP 'Daybreak' released this past March. Bapari has created soundtracks and scores that have been featured at Roy and Edna Disney/CalArts Theater, Redbull Music x Compose LA, as well as New York Fashion Week. They've headlined Boiler Room LA, played Melting Point & Papi Juice in New York, as well as numerous parties across the USA. Bapari DJs and hosts the monthly show Puffy on NTS radio and last year served as the tour DJ for Steve Lacy. Their musical style explores electronic experimentation by fusing cinematics, the avant-garde and dance music elements to create anywhere from unique underground club tracks to genre-bending sonic landscapes. Most recently Bapari was selected for the LANDxAIR artist residency program hosted by Nomadic Divisions and Werkärtz and last year they were accepted into a two-year residency program by NAVEL, the artist collective and performance space in downtown Los Angeles. They formerly played drums in the punk band F U Pay Us, as well as soccer for the Haitian national team. 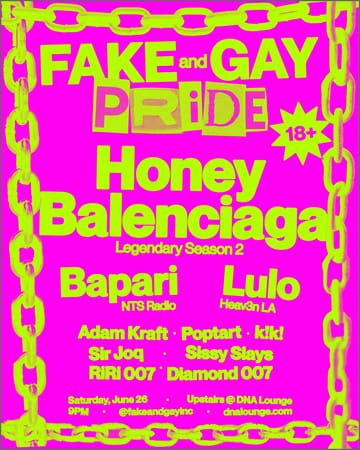