Additional Visuals by: Dæmon Core
8bitSF brings a chiptune and video game extravaganza to the DNA Lounge webcast! Featuring a very special set from Crashfaster and a live performance by E.N. Cowell.

Crashfaster is a San Francisco-based band that combines elements of 8-bit video game music, synth pop, and industrial. Their songs, while bright and effervescent, are often darker and more melancholy than the work of most artists associated with the chiptune scene, reflecting themes of loneliness and disenchantment. The group was started in 2009, initially as a solo vehicle for video game composer Morgan Tucker, who wrote bouncy synth pop tunes using vintage video game consoles as well as drum machines and vocoders. Since then Crashfaster has expanded to a full band, including vocalist Keiko Takamura, drummer Devin Nixon, and guitarist Ryan Case.

The Bay Area's own E.N. Cowell is a graduate from the school of old computers, anime, comics, movies, and surreal scifi. He forges future sounds with a hard throwback to his childhood imagination. Perfect music for a gamer with a craving for nostalgia that you can move to, or a dancer who just wants to let loose with some minimal, beat-driven EDM. E.N. Cowell is the kind of babyfaced graphic designer you might see every day on BART, hiding his musical prowess in plain sight under the guise of lowly tech dude. But give him a synth and a computer, and you've got some real magic brewing. 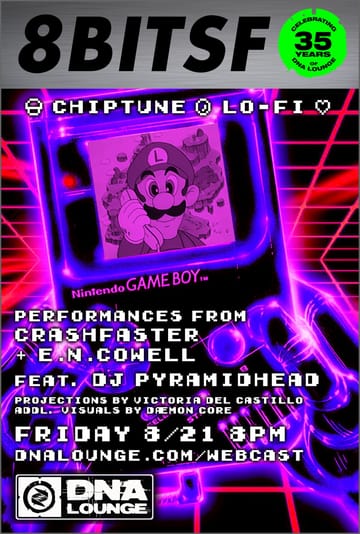