The Dollyrots
Not Ur Girlfrenz
Year of The Fist
The Dollyrots are a powerful, female led punk band that took a chance nearly 20 years ago by moving across the country to kickstart their career in California. The Dollyrots have gone from young up-and-comers to basically the parents of the punk scene - literally, as lead singer/bassist Kelly and guitarist Luis have a duo of "dollytots" that happily tour with their punk rock parents. Many original fans have followed the same trajectory as the band (live, you'll see a refreshing mix of "cool dads" and young punks). Not a whole lot of good came out of the early 2000s, but the Dollyrots sprung forth as an in-your-face pop punk trio and haven't let the years soften their sound or force them into a more practical life of day jobs. Over the last two decades, The Dollyrots have perfected their craft: relatable lyrics, soaring guitars, tight songwriting that keeps songs punchy. Even with two kids, the band hits the road often and keeps the new tunes flowing. And their hard work has paid off: the band has played with Black Flag, put an album out on Joan Jett's Blackheart label as well as Little Steven Van Zandt's Wicked Cool label, and is besties with Bowling For Soup. Even though the band has finally returned to their home state of Florida, The Dollyrots are still the beloved flag bearers for the "kiss or kill" California sound of yore - and if their past touring schedule is a clue, they'll be visiting their adopted home pretty often.

The kids truly are alright! Not Ur Girlfrenz are children, but that doesn't mean they don't know what they're doing. The Dallas trio consists of sisters Liv (guitar) and Gigi Haynes (bass) and drummer Maren Alford. As you may have guessed from the name, they're a female punk band. Their roots are classic rock, and their covers of songs from bands like the Cure and U2 bring an infectious spin to the classics. Perhaps the fact that they're barely teenagers just breathes life into anything these girls touch. It's hard not to compare them to Redd Kross, simply from the fact that they're a power pop outfit centered around a pair of teen siblings, and that the band is actually good. Not Ur Girlfrenz are protégées and friends of Bowling For Soup; BFS' Jared Reddick mentors the group and invited the trio on tour. The band had a slot on the last ever Warped Tour, forging them into a serious, need-to-see-it-to-believe-it live act.

The Bay Area's own Year of the Fist has been playing hard and fast since 2011, bringing some much needed female-led punk to life. Dual vocals are backed by solid rock licks, and run the from high energy garage to introspective neo-grunge. Last summer, the four friends and rock and roll enthusiasts just released their full length, Revive Me. 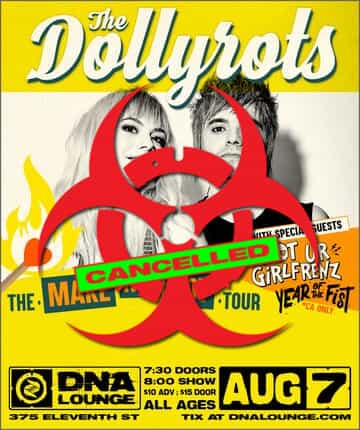