Disney-themed burlesque from Hubba Hubba Revue
Adriana A
Tyme
Jupiter Gatling
and more!
Ritual, San Francisco's premier bass music event returns on March 7th at DNA Lounge! Nebakaneza and Johnny 5 were just two random DJs who were obsessed with music of all kinds, but what brought them together was their love of Dubstep, and bass heavy music. They met online after hyping each other up, because they listened to each other's mixes so much. They got a gig together one night at a tiny club in Oakland, and everyone there seemed to think their music was too weird. It didn't matter to them though. They immediately became close friends, and eventually brothers. They formed a partnership and decided to start throwing their own weird events in San Francisco that would cater to other like minded weirdos. They worked their asses off, and just kept booking more and more of their favorite weirdos. What started in a gritty hole in the wall in 2010, blossomed into the biggest reoccurring bass event in the country.

Ritual has hosted over 200 events, booked nearly 600 artists, and at our peak had up to 700 attendees every week. We expanded into LA, worked with festivals, threw big off-shoot events, and collaborated with many other major promoters. This party has always been fueled by the people who attend it, and we have been insanely lucky by our amazing crowd who became our friends over the years. There were never any fights at Ritual, and although scenes come with their share of dramas, our crowd has always been all about the music. We kept our events affordable so nearly everyone had access, and we learned everyone's name because we had genuine conversations and experiences. You all became our family. We never had a separate line for guest list because we never wanted anyone to feel less important than anyone else. Without you, we are nothing, and we are excited to re-capture that magic once again.

Notixx is the musical conscience of Ryan Sinatra. The New York based DJ and Producer has spent the last 10 years with one mission: blurring and dissolving the lines that divide the traditional genres of Electronic Dance Music. With support from some of the biggest names and labels in the industry, he continues to release fresh, unique, and well polished music at an outstanding rate. 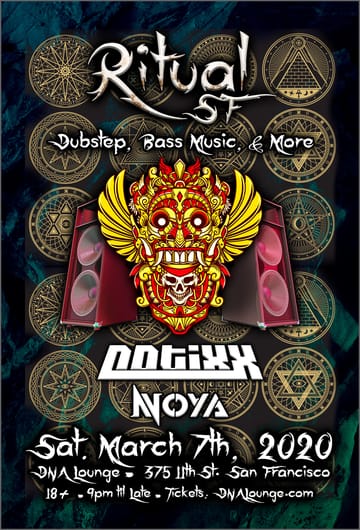