BYOAS (Bring your own art supplies)
Hey all you sketchy folks!

This month, Brass Tacks, the founder of Wolf & Sheep takes the Dr. Sketchy's stage with a pointed installation that will include performative body piercing and bloodletting. Explicitly for Truth Seekers, explicitly NOT for the squeamish.

Wolf & Sheep was founded in November 2016 out of a desire to build safer, more authentic spaces focused on the experience of the Other. The Other can be any of us. Any time you've ever felt that you were on the outside of the joke, as it were - you're one of them. So - we bring all the them's together ....what do we find? but that there is an us in the them's. The story of Wolf & Sheep is one of togetherness, trust, integrity, and exploration. We seek the very depths of ourselves and honor all the facets that we find along the way. We view control as a mutual experience that is negotiated via transparent and consistent communication. Body modification, living sculpture performances, and hook suspension are integral and vital parts of her journey. Wolf & Sheep was created with the intention of sharing that journey with those who seek. 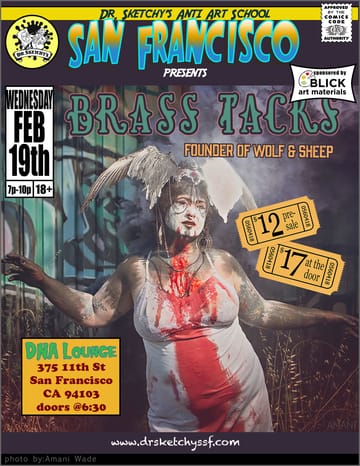