Boh! Calling all Junglists and Bassheads! Been looking for a tear out hardsteppin bassheavy event to wile out to and set fires on the dancefloor? We got dem ting for you. PLUR Alliance combines forces with San Francisco's longest running Drum and Bass night, Shelter SF, to bring you Fallout.

Evol Intent is a trio of multi-faceted producers, often referred to as a leading group in American Drum & Bass music and beyond. Having released a plethora of music over the last 15 years they are touted as legends in the bass music scene among DJs and fans alike. The various members have other projects the music community should be used to: from Knick's bass-whomp madness as "Bro Safari" to Enemy's disco/funk house pursuits as "Treasure Fingers" and Gigantor's waveform warping as "Computer Club." Along the way Evol Intent has had their work featured in videos games such as EA Sport's "Need For Speed Most Wanted," and on Cartoon Network's Adult Swim promo bumpers. Not only known for their originals, Evol Intent have remixed many other artist's works along the way, more notably Shiny Toy Guns, Raekwon of the Wu-Tang Clan, BT, Black Sun Empire, and Dieselboy. The guys have collaborated with countless artists such as Noisia, Mayhem, Spor, Ewun, The Upbeats, The Sound Of Animals Fighting, jazz legend Bill Laswell and hardcore rocker Aaron Bedard of Bane. 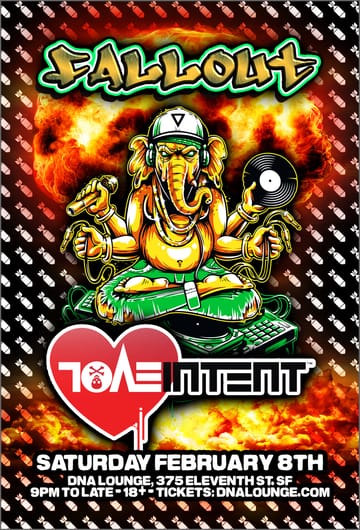