BYOAS (Bring your own art supplies)
Hey all you sketchy people! Happy 2020! We're excited to announce that our first event of the year will feature a newcomer to the Dr. Sketchy's stage, the amazing Frankie Fictitious!

With extravagant costumes, unmatched artistic imagination, and impeccable musicality, Frankie Fictitious shimmies across stages as she captivates and titallates audience members around the globe. She is known to be able to exemplify the art of tease and showcase her mastery of connecting to audience members with just the twinkle of her eye. Frankie is based in the San Francisco Bay Area, but is known worldwide as an international burlesque sensation! 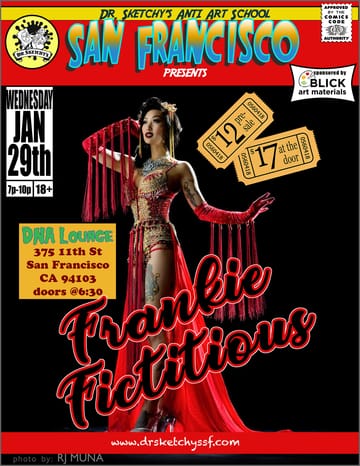