Tony Moran is a two-time Grammy nominated remixer, producer, singer-songwriter. He is also one of the most well known DJs in the house music genre, regularly playing to massive crowds at events throughout the world.

With more than 800 titles, dozens of Top 40 pop hits and countless No. 1 dance singles to his credit, the two-time Grammy-nominated Moran shows no signs of slowing down. Driven as ever, but imbued with the creative freedom to develop and evolve his trademark sound on his own terms, Moran -- like his contemporaries and role models Paul Oakenfold, Tiesto, Bob Sinclair and David Guetta -- is taking his music across the globe from the Americas to Europe to Asia and back.

Averse to categorisation in any one particular musical style, Wayne's productions takes the crowd on a musical journey where House, Anthemic Vocals, Electro and Tribal beats merge to bring the energy, Latin flavoured percussion and the uplifting infectious riffs seamlessly together to create a melodic journey you will have to dance to. 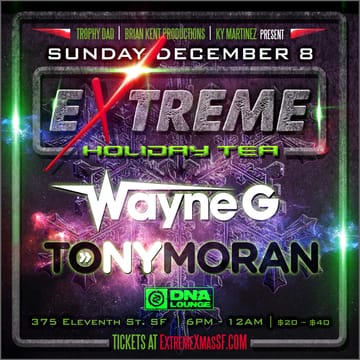