Junkie Kid
Geo
Sajche
NTXC
Tao
Junkie Kid: Musician, Dj & Producer born in Acapulco, Mexico. At an early age he moved to Spain for 10 years, and with the influence of djs like: Mauro Picotto, Dj Quicksilver and Dj Sammy he started to like the dance music.

When he has 16 he started to produce his own techno, trance, hardstyle, house and Dutch House tracks, but some years later he found his own sound with the track "Perfect" a combination of hardstyle with house and dark melodies he called "Neo-Hard House".

Geo: From the streets of Long Beach, California, Geo started his music career at the age of 13. At the age of 16, Geo was already headlining at multiple nightclubs throughout all Southern California.

Geo's live shows are most commonly known for its hard hitting energy as well as heavily incorporating music of all genres, live mash ups, smooth transitions, and entertaining MC'ing from the booth. As a producer, Geo also likes to take inspiration from his Hip Hop roots of growing up in Southern California. 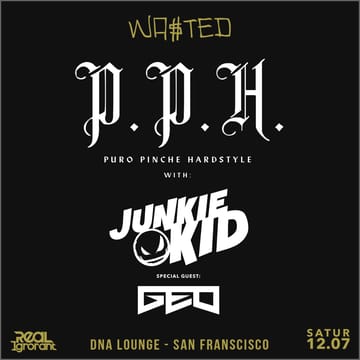