BYOAS (Bring your own art supplies)
Hey all you sketchy people! We're excited to announce that our friend Paty will be modeling for our last event of the year!

Paty Castaneda is a dancer who practices Danza Azteca which is traditional Aztec Dancing. She performs with a group based out of Union City known as Ollin Anahuac. She has practiced this traditional style on and off for 13 years. This practice gives her a connection to her ancestors and to family she has lost. Danza Azteca has been passed down, through generations, as a form of prayer and, now, as a way to keep a significant culture alive.

In the spirit of Dia de los Muertos there will be an altar set up to remember those who have passed on. Feel free to bring a picture of someone in your life who has passed or an item that represents that person.

There will also be some burning of the copal which will cause a bit of smoke. For those who are sensitive, please keep this in mind. 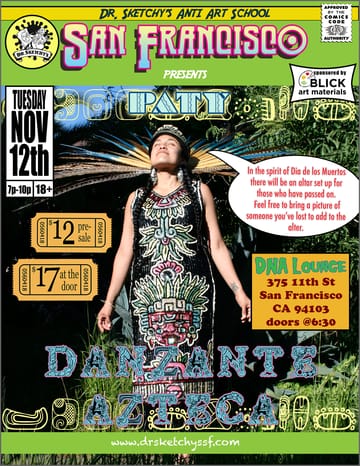