Witchripper
Forming The Void
Name
One of Seattle's best-kept secrets, Witchripper possess hot tones, smoky clean singing and impassioned barks, and shifting time signatures. Witch Ripper have an accessible sound equally adept at delivering hooks and crushing riffs. The band evoke favorable comparisons to Mastodon's powerful early work. And while it seems a little disingenuous to compare a young band to one of the most popular American metal bands of the last fifteen years, Witch Ripper invite the association, and unlike most bands that do, every piece of the performance is tastefully executed.

Lousiana's Forming the Void is one of stoner metal's best-kept secrets. A potent blend of sludge, stoner and prog, accentuated by phenomenal songwriting and damn-near radio-friendly tunes that put most radio rock to shame. They are extremely adept at this style of music for being such a young band, which is a testament to how closely they've paid attention to the bands they admire but also their collective desire to make their music their own. Whether they're foraying into slightly-psychedelic prog territory or venturing into sing-along riff bangers, Forming the void makes for a diverse listen that hearkens back to those classic albums that grab your attention and keep you coming back for more.

California Bay Area residents, Name have created possibly the closest musical equivalent to the experience of neglecting to take your daily pill... Pure chaos...With constant screams, ferocious percussion, and disharmonic guitar riffing, Name is a real beast to behold... There's the occasional glimpse of jazzy brilliance also exerted with a twist of sarcasm, and violence. 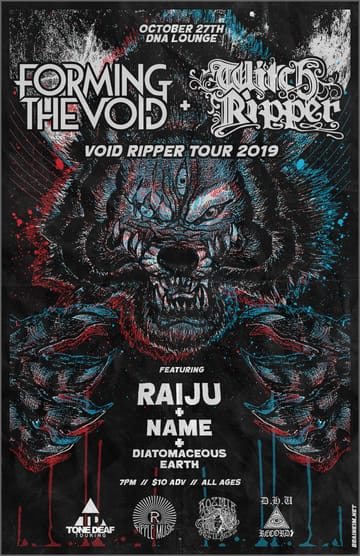