BYOAS (Bring your own art supplies)
Back on the Sketchy's stage will be the ever intriguing Catbutt! Come out and draw as they pose for us, living their best life inspired by the worlds of fantasy, swords, armor and sorcerers! Catbutt will be creating a custom amazing leather armor piece for them to model in!

If you're not familiar with our muse for the evening, then imagine a stoned cat that watched too much Lord of the Rings. This same cat drew a lot of weird things and wrote down their beliefs. A mix of the macabre and abstract.

Catbutt is a ridiculous artist hailing from Oakland, CA and a graduate of FIDM for Fashion Design. 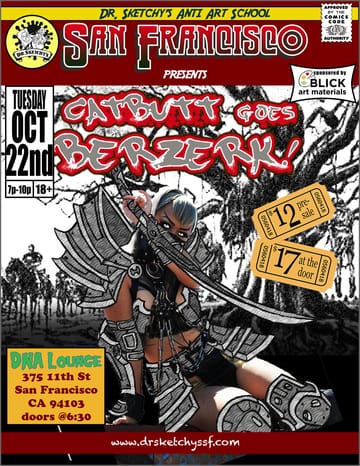