ChameleonsVox
Theatre of Hate
Jay Aston (Gene Loves Jezebel)
ChameleonsVox: The Chameleons were formed in Middleton, Greater Manchester, England in 1981 by Mark Burgess. During the Chameleons' career, they were often described as "sonic architects" and their shimmering sound as "sonic cathedrals" due to their gorgeous, innovative and atmospheric sound. ChameleonsVox is the continuation of the legendary Chameleons UK, one of the most influential bands ever to come out of Manchester.

Kirk Brandon formed Theatre of Hate in 1980 recruiting Stan Stammers on bass guitar, Nigel Preston on drums, Billy Duffy from The Cult on guitar and John 'Boy' Lennard on saxophone. Theatre of Hate had their largest hit from the Westworld album with the single "Do You Believe in the Westworld?" Renowned for their powerful performances and pseudo-political outpourings, Theatre of Hate have lost lost none of their ire. 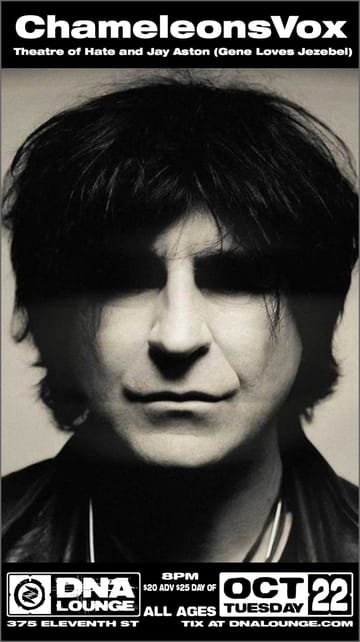