BYOAS (Bring your own art supplies)
In lieu of SF leather month celebrations, Miss Savvy is returning home and bringing something to Dr. Sketchy's never seen before! Presenting her acclaimed "Goodbye Horses" act as seen performed around the Bay Area Kink scene and Folsom street fair over the past few years.

Miss Savvy on the stage will be the amazing kinkster Luna SF!

In case you haven't got to draw the amazingly versatile Miss Savvy, she's a flirty red haired vixen who's easy on the eyes and hard on the guys. She's San Francisco's Tap dancing pinup sweetheart and what a sweet treat she is! Miss Savvy is a trained dancer, actress and model hailing from the depths of the Barbary Coast where she has been gracing the notorious variety show stages for the past decade.

She currently lives in Waikiki and produces "Savvy's Surf Shack". You may have seen her published in your favorite Rat Rodz of Bachelor Pad Magazine! She recently curated the annual Sailor Jerry Pin Up Pageant in Chinatown Honolulu! 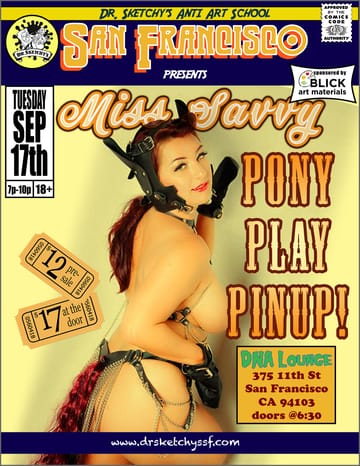