MC Frontalot
Schaffer The Dark Lord
Miss Eaves
MC Frontalot spent the last twenty years getting over being bad at kickball and being called a "nerd" by rapping into a computer and to his Star Wars acton figures. Thus began the sory of the genre that he has become the godfather of. He has taken his art form to another level. Nerdcore has metastasized into an internet phenomenon and underground touring powerhouse, with dozens of well established live acts and more than a hundred home-studio rhymers self-identifying within the subgenre. It cannot be stopped.

Schaffer the Dark Lord (or STD) is a New York City-based rapper and comedian with material best-suited for brainy and/or drug-addled audiences. Imagine a Frankenstein-esque monster assembled from equal parts Bill Hicks, Adam Yauch, Joey Ramone and Prince, stitched together inside the shell of a maniacal heavy metal ex-patriot.

Shanthony Exum (aka Miss Eaves) is a fierce femcee known for her unique electro-pop-rap feminist stylings and fun-dance-explosion stage presence. From nights karaoking in bars to performing in sold-out festivals in Belgium, Miss Eaves, realized performing was like a drug she couldn't quit and she fiended for it. 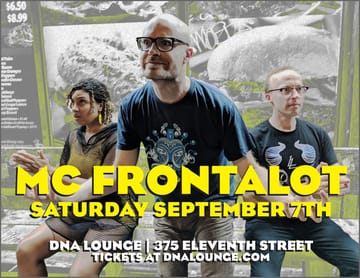