Bitter Lake
Sweet Sister
The Customers
Out of the ashes of the experimental/industrial/alt metal duo, La Fin Absolute Du Monde, Bitter Lake was born. They are a sonically dissonant, yet groovy explosion of passion and social consciousness. Part Dead Kennedy's, part Rage Against the Machine, Part Public Enemy. Bitter Lake's 3 song EP, "This is Not A War, This is Revolution" is an unrelenting introduction to the aural brutality of the raw rage that Bitter Lake unleashes on the listener.

Sweet Sister are Grimy, Glammy hard rock from Portland. If the Backyard Babies had four babies with the cool members of Guns n Roses (Izzy Stradlin, Slash and Duff), you'd get something like this.

The Customers are self described as an "Oakland Rock n Roll Band" but what that sonically entails is a muscular and unpredictable blend of power punk and raw rock n roll infused with rage and chops that could only come from the east bay's most formidable city. 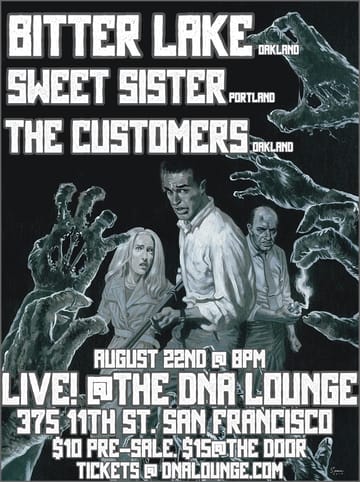