We are sorry to report that Robbers' Roost will not be performing, due to a bad car accident.
This is not your Grandparents' folk music. The Bridge City Sinners take folk songs in the direction of a punk rocker. A rowdy folksy mosaic of banjo, violin, guitar, upright bass, ukulele and saw. The Sinners started their journey as a rotating cast of friends in 2016 who just wanted to play music on the streets "busk" in Portland, Oregon. They have transitioned into a powerful force playing festivals in 2018 such as Vans Warped Tour, NW String Summit, the Fest, & Seattle Folklife Festival.

Wayfairy started with a banjo on the turnpike and has grown into a six piece music project that fills the sonic space between mournful folk and riotous punk. Originally the brainchild of multi-instrumentalist Quiver Watts, the project's first songs were written to pass the time while waiting for rides between towns while along the route of the Keystone Pipeline documenting resistance to extraction and imperialism. Since then Wayfairy has grown into a collective project that blends accordion (Jordan Stern), banjo, violin (Mega Bloom and Ari Cowan), washboard (Jazmine Davis) and upright bass (Blue Goldberg) with soft vocal harmonies, punctuated by raw wails. Wayfairy's lyrics are decidedly queer/feminist, anti-state, anti-fascist and through our music we hope to contribute to a growing movement for liberation 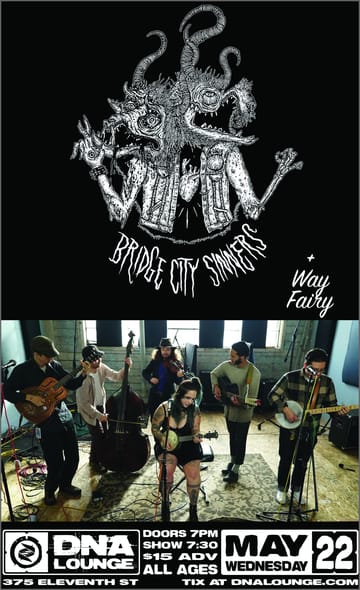