Death Angel
Striker
Dress the Dead
Phantom Witch
Among the youngest bands ever to storm the metal genre, Death Angel has come to be known as one of the most influential bands to emerge from the thriving Bay Area Thrash Metal Scene in the early 1980s. An era when one could catch Cliff Burton (Metallica) at the front of the stage at Ruthie's Inn banging his head to Death Angel's inventive style, and speedy, complex arrangements.

Striker is an Edmonton-based recording and performing heavy metal band that has grown immensely through their years in the industry. A classic mix of heavy metal, hard rock, and 80's hair metal, their music features powerful, clean vocals, catchy choruses, vocal harmonies, and impressive guitar leads.

Dress The Dead features ex_Forbidden guitarist Craig Locicero and Witch Mountain singer Kayla Dixon. Dress The Dead is here to rock and also inspire like-minded, kind, intelligent people to KEEP FIGHTING. Let their message be an inspiration to all to do everything in their power in daily life to make whatever difference they can. Now is not the time to disconnect from reality. NOW is the time to lead from the heart.

Phantom Witch were sent to this time from 1986 to bring Thrash to the future. Hold on to your butts. 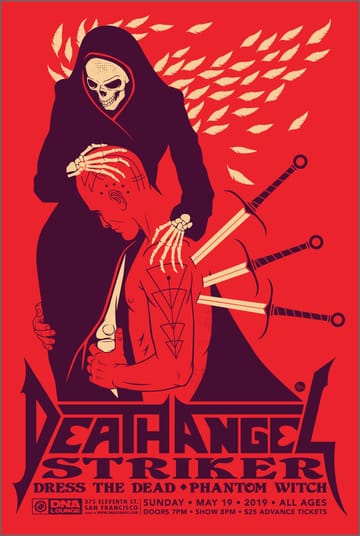