Alex has been producing music as Triangle Eyes, The Rockitmen and Triple Distilled and working with such acts as X-DREAM, The Delta, Extrawelt, Fuzzion, and Metalogic.

With a broad knowledge and many years of experience of the electronic music scene in general, Alex is a very well-respected techno/neo-trance DJ, playing frequently in clubs across North and South America, Asia, Middle East, Europe and participating in numerous electronic music festivals all around the world. Alex is known for his very long sets that sometimes come close to 20 hours of playing nonstop. At the current moment, besides running his Boshke Beats, Alex is also managing Horns And Hoofs Entertainment and X-Dream's Gravity Plus record labels.

Alex plays psychedelic trance under Acid Black moniker and recently released and executed X-DREAM "Remixed" double CD album on the legendary Flying Rhino label, which reached top places in charts all over the planet and got more than a warm reception. 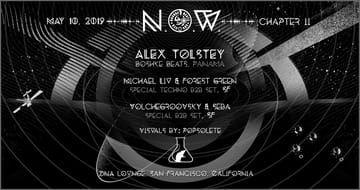