Kalmah
Vreid
Empyrean Throne
Kalmah are death, thrash, speed, black metal and bombastic, joyful, folk-tinged melodic death metal simultaneously stitched together in one glorious and seamless Finnish package. It is a very strong dynamic that showcases a band so fully realized and in such control of their sound, to be able to pull off such musical feats as described above. Kalmah cook up the best kind of satisfying, spit-shined, bread and butter melodic death metal that may have been imitated to hell but only perfected by a chosen few.

In the pursuit of all things faster, harder, bloodier and more brutal, Kalmah give you permission to sit back and enjoy this kind of glorious and melodic music that has formed a cornerstone in the developments of most serious metal fans' musical growth. It will feel like coming home.

Vreid is a black metal band that came into being after O.G. Norwegian Black Metal band Windir broke up, following the death of lead singer and founder Valfar. The band was formed in 2004 by three former Windir members and a new guitarist; Ese. Ese had been a close friend of the Vreid members for years, and he was co-engineer on Windir's 'Likferd' album. Translated from Norwegian into English, Vreid's name means "Wrath". Although Vreid incorporate many elements of Windir's music, they have fused the desolate atmospherics of black metal with thrash metal and 70s rock to create an original sound. 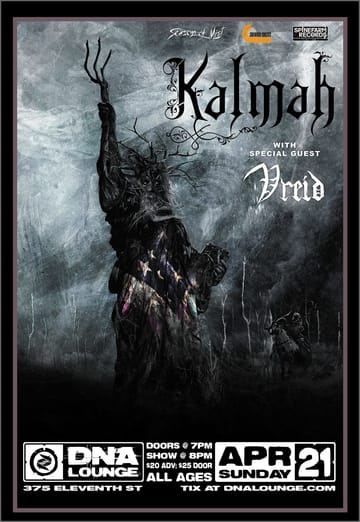